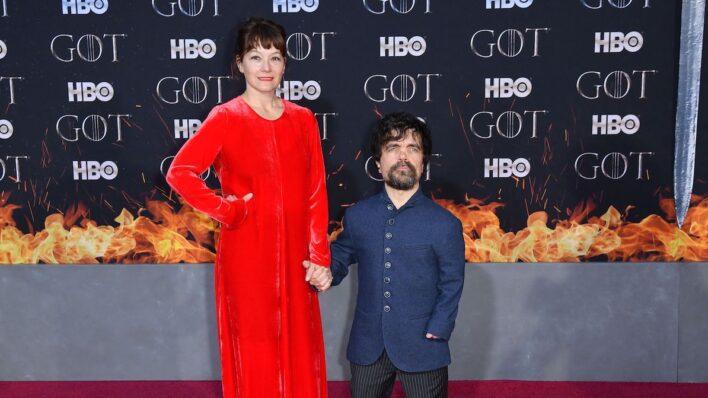 Peter Dinklage and Erica Schmidt have been married for over 15 years. At first look, the two form an unconventional pair but they teach us that love goes indeed beyond appearances. Here’s the powerful story of their relationship.
By Barbara Pavone    July 6, 2020

Peter Dinklage and Erica Schmidt have been married for over 15 years. At first look, the two form an unconventional pair but they teach us that love goes indeed beyond appearances. Here’s the powerful story of their relationship.

Peter Dinklage has been acting since the ‘90s but it wasn’t until he was cast as Tyrion Lannister in Game of Thrones that he became a megawatt A-lister. Dinklage was thrust into the spotlight and while the show ran from 2011 to 2019, he simply couldn’t get away from the fame.

Even so, he and his wife, Erica Schmidt, managed to stay out of the spotlight and keep their private life away from prying eyes. The pair is incredibly secretive when it comes to their family, but they have offered a few glimpses into what makes their union work.

Here’s what we can learn from Peter Dinklage and Erica Schmidt’s under-the-radar romance:

Although it hasn’t always been the case, Peter Dinklage is “super flirtatious,” according to actress Lena Headey a.k.a. Cersei from GoT. So much so that she actually dubbed him “the most successful flirt I’ve ever met” during an interview with Rolling Stone.

While Peter didn’t disagree, he did confess that it took a lot of time for him to feel comfortable in his own skin.

I was socially a little bit of a mess, in terms of confidence with the other half.

“You get a little older, you get comfortable. Women respond to comfort, and a sense of humor,” he continued, explaining, “I was always able to make them laugh, so that helps a lot. Women on the whole are often not as shallow as men are,” he added. “They can be, but they cut through things a little more easily than men do in terms of that superficial stuff.”

One such woman was Erica Schmidt. The pair eloped to Las Vegas and said “I do” in 2005, long before Peter’s big break, which meant she had to adjust to her husband’s newfound fame — and the admiring fans that came with it. “Lately, girls have been, like, licking his face,” she told Rolling Stone.

But it’s not the attention that irks her, it’s the fact that people are surprised by his appeal.

What’s frustrating about it is that Pete is an incredibly handsome, charming, funny guy, but when he does a magazine or something it’s like, ‘Isn’t it amazing he’s four foot five inches tall and he’s sexy?’ You know, that’s just who Pete is. And the rest of the world has to catch up.

Peter Dinklage and Erica Schmidt don’t compete with each other

Not only is Erica Schmidt comfortable with the adoring attention her husband receives, she’s also totally cool with his A-list status outshining her own in the entertainment industry. That’s because Erica, who is an award-winning playwright and theater director, is focused on her own impressive career rather than competing with her hubby’s.

As of 2020, Schmidt had directed 10 Off-Broadway productions, including A Month in the Country, which starred Peter, and Humor Abuse, which won her the 2009 Lucille Lortel Award for Outstanding Solo Show.

Erica also wrote, directed, and performed in 2017’s All the Fine Boys, which starred Abigail Breslin, and received some great reviews. Broadway World, for example, praised Schmidt’s writing, professing, “Her dialogue is brisk, interesting and rings true, especially given the fine work by her talented ensemble.”

While working in the same industry might lead to unhealthy competition or even animosity between some partners, Peter and Erica are so proud and secure in who they are that there’s just no time for jealousy.

In fact, ask Peter who is the most successful artist in their household and he’ll quickly let you know it’s not him. Speaking with The Guardian in 2015, Peter called his wife “brilliant” and gushed, “She loves theatre. Unlike a lot of other people in our profession where film is the ultimate goal, theatre is sacred to her. It’s not entertainment; it’s art.”

She’s very inspiring. She’s definitely the artist of the family. I am just the TV actor who pays the bills.

They don’t seek outside validation

Peter Dinklage and Erica Schmidt have been married for 15 years and they’ve spent most of their lives in show business and yet, somehow, they’ve managed to keep their private lives exceedingly private. Almost nothing is known of how they met or how they tied the knot and the same is true of their kids.

In 2011, they had their first child, a daughter, whose name they never revealed. “Let me tell you right now: her name is not Zelig,” Peter told The Guardian, laughing, “But it’s hilarious that that’s a fact in Wikipedia.”

Six years later, they welcomed their second child and, this time around, the “notoriously private couple” didn’t reveal the little one’s name, nor their gender. In fact, the only reason the press got wind of the birth was because the happy parents were photographed attending a concert with their newborn.

Their love is seriously sweet

While Peter and Erica may not shout about their love from the rooftops, it’s clear that their relationship is seriously sweet.

Yes, they rarely reference one another in interviews, but there’s no question that Dinklage is a proud husband and father. When he won the 2011 Emmy for Outstanding Supporting Actor in a Drama Series, he proclaimed, “I love you, Erica. You’re amazing. I love you.”

Speaking with Access Hollywood at the 2012 Golden Globes, just six weeks after his daughter was born, he called fatherhood “incredible” and “life changing.” A few months later, he told Rolling Stone his daughter was simply “beautiful” and joked, “I wonder who the father is.”

Having kids made Peter Dinklage a better man

Not only is Peter Dinklage smitten with his kids, but he credits becoming a father with making him a better man. Recalling his youth in a 2018 Vulture interview, the actor opened up about his struggle with self-esteem and self-worth.

“Oftentimes, when I was younger, I’d think in negative terms,” he admitted. “Without believing in reincarnation I’d think, ‘What did I do in my past lives to deserve this scarlet D on my chest?’ Because a lot of the time it sucks.”

The arrival of his baby girl helped put things into perspective. “I think everything gets easier as you get older,” he noted. “When you’re young your ego is so strong. Then you get older and you get freed from yourself. Maybe it’s having children that does it […] You’re not who you were before having kids.”

They’re a team through and through

When Rolling Stone met up with Peter Dinklage in 2012, the magazine described his life as being near-perfect with a “beautiful new baby” and a “happy marriage” that accompanied a seriously impressive career. There was just one downside to his blissful existence: the inability to keep a low profile.

“I can’t be anonymous because of my size,” the actor pointed out while his wife added, “Even if they don’t recognize him, they think he’s Wee Man from Jackass or they think he’s the guy from In Bruges, so there’s a constant assault.”

Which is why, when Peter proposed they move from Manhattan to upstate New York, she agreed. Even if it wasn’t the most convenient move for her career, as she works on Broadway… in Manhattan. As Peter admitted, “The list of people happy here is probably my dog, me, the baby, then my wife – from happiest to least happiest.”

They may not talk about their relationship all that much, but it’s clear that Peter Dinklage and Erica Schmidt trust and support each other unconditionally. They refuse to compete with one other on a professional level; they don’t allow jealousy to taint their union; and they’re willing to make sacrifices for one another, like Erica agreeing to a (temporary) move to rural New York, so her hubby could get a much-needed break from the spotlight.

If there’s one thing that’s blatantly obvious about their top-secret relationship it’s that they are sure about who they always want to go home to and spend the rest of their lives with: each other.