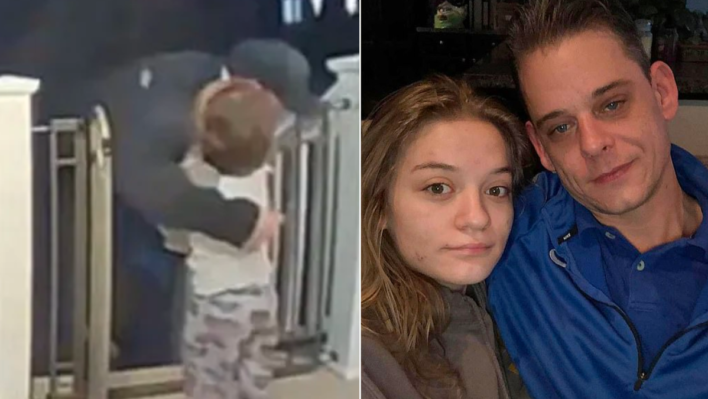 The simple hug meant more to the grieving father than anyone could imagine, giving him a moment of comfort when he needed it most.
By Heidi Hamm    November 9, 2022

The simple hug meant more to the grieving father than anyone could imagine, giving him a moment of comfort when he needed it most.

When delivery driver Ryan Catterson dropped off a pizza order at the West Warwick, RI, home of the Sheely family, he was met with more enthusiasm than usual.

Granted, most people ARE happy to receive a dinner hot and fresh to their door (bonus points for not having to cook it) and they tend to be appreciative. More often than not, they say “thank you,” and give a good tip.

What they don’t tend to do is hug the delivery driver (even if they may want to).

However, for the Sheely family’s two-year-old son, that’s precisely what he did.

Little Boy Hugs the Pizza Delivery Man; Its Impact is Greater Than Anyone Could Have Imagined

Catterson had just handed off the pizza to Lindsey Sheely and was stepping off the porch when the sweet moment happened.

Initially, Sheely and her son were at the front door, calling “bye-bye!” when the little boy suddenly came bounding out the door, chasing after him.

RELATED: Why a Local Little Caesars Delivered over $70k Worth of Pizza – For Free

Upon reaching Catterson, he excitedly threw his arm around him, wrapping him in a sweet embrace. Catterson responded by hugging him right back.

The heartwarming moment was caught on the home’s doorbell camera.

While it seemed to just be a spontaneous act by an excited two-year-old, in actuality, it was so much more. Because what the Sheely family didn’t know is that Catterson had tragically just lost his 16-year-old daughter.

Mom Shares the Sweet Video on Social Media, Learns the Sad Truth of a Grieving Father

The following day, Lindsey Sheely decided to share the video on social media, thinking people would get a kick out of it. At the time, she was unaware of Catterson’s story.

She captioned the video: “Last night when we got our pizza (and ranch) delivered, Cohen ran out to hug the delivery guy and tried to give him a kiss, too! We thought it was so sweet and funny, then realized that our doorbell might have caught the interaction on camera, and it did!! I hope it gives you a laugh and warms your heart like it did for us.”

Turns out, It warmed the hearts of thousands of people, quickly going viral. Thanks to the power of social media, the video eventually made its way to Catterson. He contacted Sheely to let her know just how much the encounter meant to him.

RELATED: Michael Che Lost His Grandmother to COVID – What He Does Next Will Change the Lives of Her Whole Neighborhood

It was then that he shared that his daughter, who was living with his ex-wife in California, had passed away after struggling with mental health issues.

Still raw with a grief no parent should ever have to know, Catterson was just barely getting by. And at a time when he so desperately needed it, he found solace in a simple hug.

“After losing my daughter this past week, it touched me because it was like she was there. It really just meant a lot to me. It’s going to be tough not going to be able to hug her again,” he told Fox13 News. “A lot of people are commenting that may have been her looking out for me. Those words mean something. Maybe she’s there.”

What Prompted the Little Boy to Give a Stranger a Hug

Obviously, Sheely’s son had no idea of the pain that Catterson was carrying. All the little boy knew was that he wanted to give him a hug and he acted upon it.

What makes this story even more poignant, however, is that hugging a stranger was completely out of character for the two-year-old. Sheely believes that the “hug was a little blessing from God.”

And it’s also a powerful reminder for all of us.

Every day we have brief encounters with people and then they’re gone. It’s so easy to never really even look at them. To never truly see them or the pain that they may be going through.

This little boy may not have known what Catterson was experiencing but his actions helped to bring a sliver of light into an otherwise extremely dark time. He turned a normal encounter into something extraordinary — with such a simple gesture of kindness.

While we don’t all need to start hugging our delivery drivers, it just goes to show how important it is to spread kindness. After all, you never know what someone may be going through. And that small act of kindness? May be just what someone needs, at a time when they need it most.