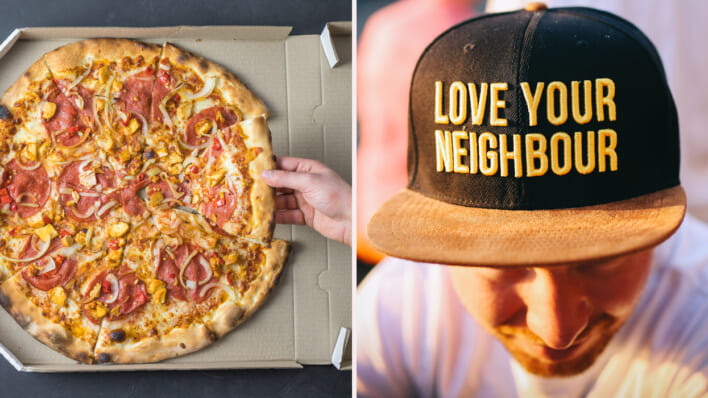 With one note, a fast-food manager overcame tragedy to set into motion a movement of giving that’s taken over a city and touched thousands.
By Bryan Liquor    May 9, 2022

With one note, a fast-food manager overcame tragedy to set into motion a movement of giving that’s taken over a city and touched thousands.

There are some moments where you can only appreciate their magic years later.

Shortly after Jenny and Mike Stevens opened the doors to their first Little Ceasars franchise in North Fargo, one such moment would unfold. There, they noticed something, or someone, curious: a man who’d been sitting outside a gas station for over two hours.

Speaking to TODAY, Jenny remembered having the motivation to act. “My daughters and I were looking out of the window and saying should we get him something,” she said, and they would soon discover the power that one small gesture had.

How a Little Caesars Helped the Homeless Community with Free Pizza

As patrons came to the restaurant for a slice of pizza, the Stevens also noticed others were looking for pizza in the restaurant’s dumpster. That’s when Mike decided to put up a sign in the window. Here’s what it said:

“To the person going through our trash for their next meal, You’re a human being and worth more than a meal from a dumpster. Please come in during operating hours for a couple of slices of hot pizza and a cup of water at no charge. No questions asked.”

Just like dough in the oven, a movement started to rise and bubble. Instead of rifling through the trash, others would swing by for a slice of pizza and water.

With time, the Stevens’ would not just give a slice but a whole box of pizza to those in need.

Unfortunately, the Stevens’ giving spirit would soon be challenged when they got some tragic news that patriarch Mike was diagnosed with Leukaemia.

While they could have taken a step back, true to Mike’s mission to help others, they not only pushed on but expanded. Partnering with local homeless shelters, they gave away free pizzas to those in need every week.

They also set up a GoFundMe account to cover the basic cost to keep expanding everyone’s piece of the pie. It’s been a wild success, as they’ve given away over 142,000 slices — or over $70,000 worth of pizza — and countless smiles.

Jenny added that it’s now a weekly routine for her to swing by one of the shelters to serve up slices to those living in homelessness.

I’ve been told that’s their favorite night. To have this little night, one time a week that’s pizza night and movie night, may sound like a silly thing, but it’s making a continual difference in these peoples’ lives

Sadly, Mike passed away from Leukemia at age 66, but Jenny said his legacy of love lives on.

“He really, really pursued this,” she recalled. “It’s a small thing that we can do to bring a big difference in their day and it’s just kept going. You have to come together to help each other out. We just do it because it seems like the right thing to do.

“He said we have more than we need and these people are struggling to find their next meal, so why not help?”

How much would our lives change if we all gave a bit? With a little introspection, we’d realize that what we get from giving is far more than the cost of giving.