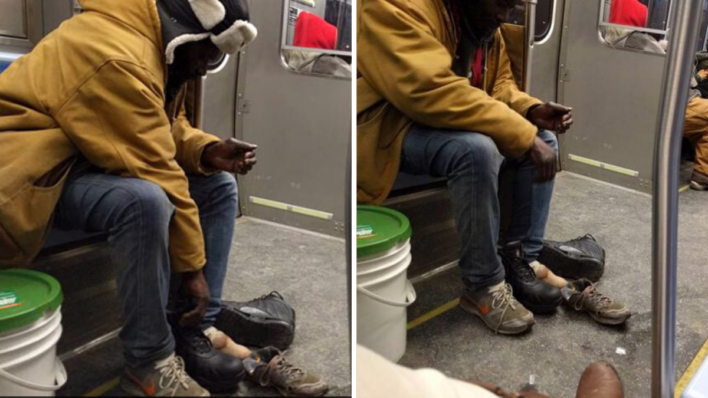 In a quiet act of kindness, one passenger on Chicago’s subway removed his boots and gave them to a cold homeless man.
By Sophie Tolias    April 20, 2022

In a quiet act of kindness, one passenger on Chicago’s subway removed his boots and gave them to a cold homeless man.

Jessica Bell, an attorney and advocate in Chicago, was riding the subway home when she witnessed a heart (and foot) warming act of kindness.

She was sitting across from an “older, weathered-looking” homeless man, who later said he was from Louisiana. He pulled his swollen feet from a flimsy pair of running shoes, the backs folded down like slippers to leave enough room for a thick layer of socks to fit inside, she wrote in a Facebook post.

Why One Passenger from Chicago Quietly Helped a Homeless Man

“I don’t know how many pairs of socks he’s wearing in an attempt to keep his feet warm but there is blood seeping through,” she wrote on Facebook.

Suddenly, Bell says, she saw another man unlacing his new, expensive-looking boots and hand them over “in a blink-and-you’ll-miss it fashion.” The man, who Bell later found out was 38-year-old Maurice Anderson, was in town visiting family and was carrying a satchel and a suitcase and also gave the man a pair of socks.

If you’ve got 20 pairs of shoes, you can only wear one at a time. I wished I’d had more socks.

The incident occurred just as frigid winds and a snowstorm were hitting the city. “Maurice took the shoes off his feet in the middle of a Chicago cold snap,” Bell told CTVNews.ca

After handing over the shoes, Anderson advised the homeless man to clean his feet before putting on the fresh pair of socks, Bell recounted. The homeless man later told her that the boots came as a relief, because he was afraid his feet had become frostbitten from the cold.

He didn’t draw a lot of attention to it. It was so quiet and selfless.

RELATED: Stranger Notices a Barefoot Woman on a Train and Responds with a Remarkable Surprise

“I love that in a time and place where hate and apathy are rampant, quiet compassion appears without warning,” Bell wrote in the Facebook post.

Bell told CTVNews.ca she was truly touched by Anderson’s generosity, adding that it’s just one of the many selfless acts that often go unnoticed in the world every day.

Look around and notice those small selfless acts of kindness, and like Bell says, “be the change.”

“I’m inspired to continue to try to ‘be the change’ and I pray you are too,” she wrote on Facebook.