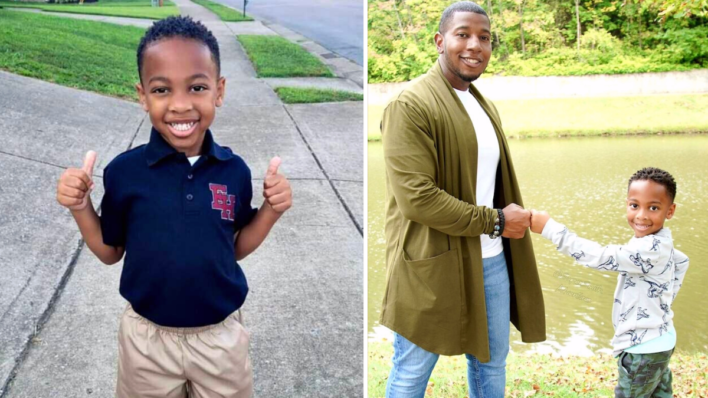 One little boy gave a homeless man the last of his money at a stoplight, inspiring a whole lineup of people to do something amazing.
By Amber Dowling    March 28, 2022

One little boy gave a homeless man the last of his money at a stoplight, inspiring a whole lineup of people to do something amazing.

Any parent can attest that kids are always watching. That’s why we try (as often as possible), to be a good role model for our young ones — you never know what they might pick up from us.

Justice Smith definitely knew this about his five-year-old son, Justus Mateo, which is why it warmed his heart one day last fall when the pair were on their way home from the dentist and Justus emulated some of his dad’s own kind behavior.

The Interaction with a Homeless Man That Became a Teachable Moment

According to a Facebook post from Smith, the pair stopped at a traffic light and they spotted a homeless man in the median. Smith wanted to help but he had no cash or change on him, so he waved and smiled instead. Justus also noticed the man.

“Uncoached, he insisted I give the man the 30 cents he had in his pocket. It’s almost as if he heard my thoughts and responded out loud…,” Smith wrote. “I was more than happy he wanted to do this with joy (it means he’s been watching), BUT honestly I was hesitant.”

Smith explained he was hesitant because it was only 30 cents.

My own pride and thoughts of the homeless individual’s unknown reaction to receiving just two coins was standing in the way.

“I didn’t want to give this man who clearly needed all the help he could get, just 30 cents,” he continued.

With the traffic light about to change, Smith had a decision to make. He could let his son believe that everything he had to offer wasn’t good enough, or he could roll down the window and hope the man appreciated the gesture. Thankfully, Smith self-reflected long enough to realize he was the only deterrent in the situation, and in the end he went with Option B.

“Listen, I almost told my son, ‘Let’s wait to give until we at least have one dollar,’” he wrote in his post. “I almost told our son by my inaction that what he had wasn’t enough… I almost showed him what he sees as a good thing and is in fact a good thing, isn’t good enough to make a difference in someone’s life. I almost taught him pride was more important than helping another human in need… Thank God I quickly snapped out of that foolishness.”

I almost taught him pride was more important than helping another human in need.

Smith rolled down the window, explained the coins were coming from his son and that the five-year-old wanted to help this man by giving him everything he had.

“The smile on that man’s face lit UP the intersection,” he said. “He said to Justus, ‘God bless you, little man! Thank you so much!’”

As if that story isn’t inspiring enough on its own, Justus’ actions motivated many of the people behind them at the traffic light to also open their wallets (and hearts). Even though the light had changed green, there were people behind them giving the man money, and no one was honking impatiently because the cars weren’t moving along in a timely manner.

“The number of people who rolled down their windows last-second after his gesture to give to this man was simply incredible,” Smith detailed. “Oh yes, I was paying close attention to the rearview… I typically do in hopes that someone else will give if I can’t. Who knew it’d be our five-year-old to start the blessing??”

Our little boy, without even realizing it, reminded me once again by his actions that it’s always about the heart.

The father then mused about what that day could have looked like for the homeless man if he had let his own insecurities get in the way and if he had told his son to keep his money to himself instead.

“It doesn’t matter how much you have or how little; giving in love and sincerity will often bless others more than we think,” Smith concluded.

Children Can Teach Us To Open Our Hearts to Everyone

Smith posted about his son’s giant heart back in October 2021, and the post has since gone viral. Many call it a powerful, enlightening, and touching message, while others are lauding Smith for his parenting skills. Most seem to agree that both are inspiring as heck.

“You’re such an amazing dad!” one person wrote. “What a precious ‘lil guy you’re raising. This story has really lifted my spirits today. Thank you for sharing!”

“Beautiful- your son’s giving heart and your insightful humbled reflection both causing ripple effects!” wrote another.

Seeing young people give back is always amazing, and it’s fulfilling as a parent when you see your little ones trying to help others in need. That’s why it’s always a good reminder to do what we can to help others in a variety of situations, no matter how big or how small the action may seem.

That could mean passing money to someone in need, giving a sad family member or friend a hug, tipping generously for a meal, or even just being polite to customer service people, cashiers, and others working in often-underappreciated jobs.

Talking about why you’re doing what you’re doing and how it can make a difference in someone else’s life may also help your children to understand and absorb the information they’re processing.

After all, most parents can agree that kids are unpredictable if nothing else. You never know how your own behaviour will come back to you through them.