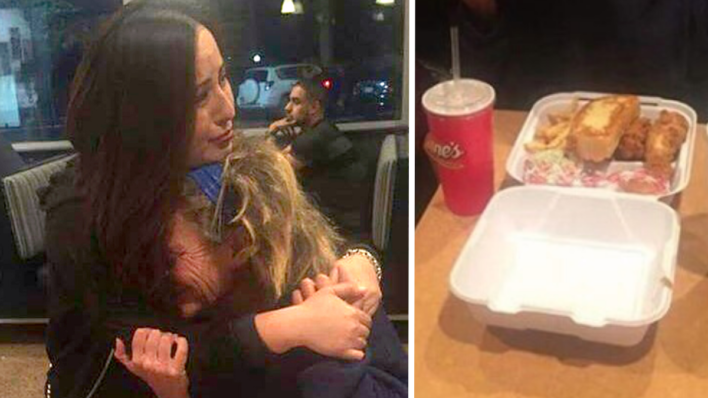 When she noticed a homeless woman asking customers for their leftovers, one diner decided to go above and beyond for the stranger.
By Lindsey Staub    February 10, 2022

When she noticed a homeless woman asking customers for their leftovers, one diner decided to go above and beyond for the stranger.

For most, Thanksgiving is a time for friends, family, and food. Unfortunately, not everyone is able to spend the holiday with loved ones or a full meal; some people are forced to beg for scraps.

That’s what a homeless woman in Anaheim, California, was doing when Carmen Mendez and her boyfriend went to a Raising Canes restaurant around Thanksgiving in 2015.

The homeless woman didn’t scare Carmen like she had scared some of the other patrons.

“I live in an area that’s not the greatest,” Carmen told Today. “Literally right outside my door there are homeless people at the parks. So sometimes I’ll go sit with them and ask about their day, and ask if they want to go to a shelter. I’m more than happy to put them in my car and take them there.”

Carmen watched as the woman circled the restaurant, asking customers for their leftovers.

Not one person said yes, they all ignored her and threw it away; it broke my heart. I have been volunteering with the homeless now for many years. They don’t repulse me or make me sick to my stomach.

Then and there, Carmen decided to help. “I hold them all with so much love,” Carmen wrote. “So I told Fred if I see her before we are done eating I will give her my food.”

Opportunity to do more

Unfortunately, by the time the woman came back around, Carmen and her boyfriend had nearly finished eating. All Carmen had left on her plate were five fries and one chicken strip.

l gave her my food and watched her sit and eat it…..but something didn’t feel right. I felt like a horrible human being feeding her my leftover chicken strip..she deserved so much more.

What she deserved, Carmen thought, was a full meal.

“When I ordered the meal I asked the employee for a huge favor to please do not kick her out as we waited,” Carmen wrote. “I could already see the disgust on people’s faces as she sat at the table eating the leftovers I had given her. News flash people, not all homeless people smell like roses.”

Carmen caught the woman as she exited the restaurant and shared the news: There was an entire meal on its way out just for her.

“The look on her face said it all. I have never felt something like this…pure, real gratitude. That hug she gave me was like a hug I had never felt. Those tears she shed were felt deep in my heart. I held her tight and let her let it out,” Carmen wrote.

Sharing the act of kindness

While Carmen and the woman hugged, Carmen’s boyfriend took a picture of the interaction. Carmen later posted the photo on Facebook, along with a caption describing the event. The post went viral with 161,000 comments and 122,000 shares.

“Thank you so much for sharing that precious moment and for lighting up someone’s life even if only briefly. Your love and compassion will continue to shine,” commented one Facebook user.

Carmen wants others to follow in her footsteps and care for strangers who need help. “That is a moment I will never ever forget. So next time u judge a homeless person think twice,” she concluded.

Not only did Carmen feed the woman, she reminded her that she is cared for. Even as a stranger, we have the ability to completely change someone’s day, and that’s what Carmen did when she bought the woman a meal. Carmen’s compassion reminds us all to be human and to treat others like humans too.