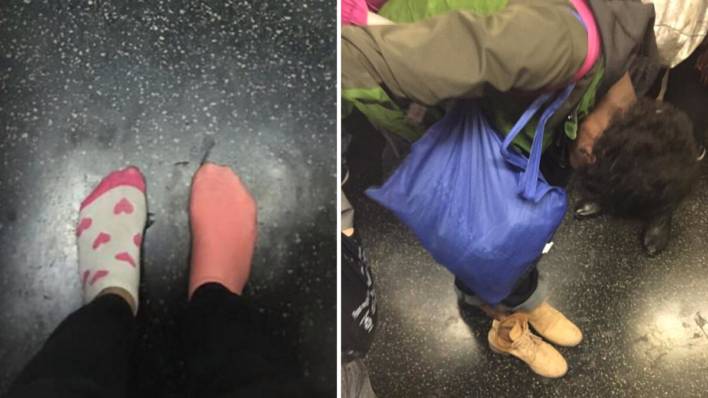 One woman made an impactful decision to help rather than judge when she saw a homeless woman without shoes on a train.
By Joel Balsam    March 18, 2022

One woman made an impactful decision to help rather than judge when she saw a homeless woman without shoes on a train.

Kay Brown was riding the train one day when she saw something that shocked her. The 26-year-old saw a woman get on the train who was wearing a light jacket, a thin shirt, and no shoes.

Immediately, something in Brown’s gut motivated her to help this woman.

“You see the subway each day and you see how gross it is. This woman walked on and it’s the middle of November… I noticed immediately that she was barefoot,” Brown told ABC News in 2015.

Brown worked up the courage to talk to the woman. She asked what size shoes she wore, and as luck would have it, they wore the same size.

So then and there, Brown took off her boots and gave them to the woman.

Something in me, it’s just being a human you know, I had to reach out to her.

Surprised, the woman asked Brown if she was sure she wanted to give up her boots. It would mean that Brown would be forced to walk home six blocks in her mismatched socks. But she had no doubts.

“She was so gracious and so nice, and then she started crying and bent down putting them on. There was nothing I’ve ever felt that good to do for somebody,” Brown added.

How a Simple Kindness Was a Deed Worth Sharing

After seeing what Brown did, another passenger gave Brown their socks so she could have a little more padding as she walked home.

“What is six blocks when somebody has been living God knows how long without anything on their feet?” Brown said. “It really makes you think, wow, I need to put myself in their position.”

Brown wasn’t so sure about sharing her experience on social media, but in a world filled with so much negativity she thought it’d be worth doing to brighten people’s days.

“I wasn’t initially wanting to post it at all,” she said. “Then I thought, ‘Every time you open Facebook there’s something negative and it brings you down, and now I’m going to share something positive.'”

If this is a 15-minutes of fame thing, I’m glad it’s for something so uplifting and good.

How a Minor Inconvenience Led to a Major Reward

Those who live in cities likely see homeless people every day, and chances are, they just walk past them. But that’s not how it has to be.

Brown saw a homeless woman and instead of ignoring her bare feet, she did something to change her day. It likely changed her life, too, for as long as those boots held up. That raises the question: What can we do today to impact another person’s life?