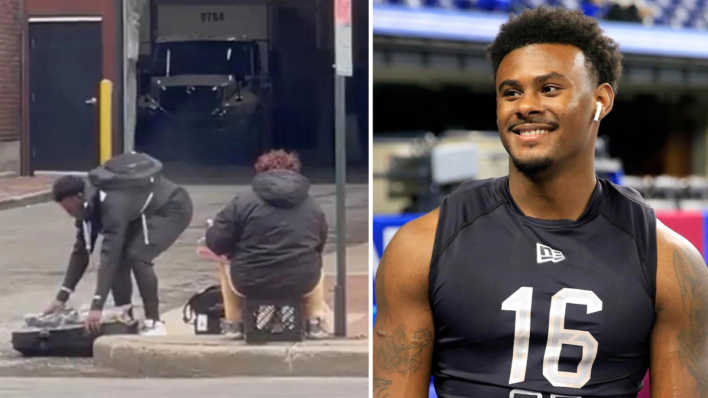 One college football player and NFL prospect went viral for his act of kindness to a homeless pregnant woman.
By Sophie Tolias    April 28, 2022

One college football player and NFL prospect went viral for his act of kindness to a homeless pregnant woman.

Malik Willis, a senior at Liberty University and a quarterback for the Liberty Flames, was in Indianapolis, Indiana, for the 2022 NFL scouting combine.

The 22-year-old had just left a Nike event where the sportswear brand had gifted him a suitcase full of new clothes. When he got outside, he saw a homeless woman and her son sitting on the sidewalk. He stopped, opened his suitcase, and gave her some new shirts.

The act of kindness was captured on camera from across the street by admirer Ryan Lacey and shared on Twitter.

Lacey captured Willis with his swag-packed suitcase wide open on the sidewalk as he dug around for pieces to give the woman, whose back is to the camera.

He appears to have already given her several items, including at least two items of clothing still in their plastic wrapping and what looks like a backpack at her feet; he then reaches in again and hands her another item of clothing.

The video quickly went viral, and in just a day was viewed over 3.1 million times on Twitter.

“I walked past her on the way to the Nike suite and I chopped it up with them and I walked out with a suitcase and whatnot,” Willis told the NFL Network.

And I felt bad because I saw her son. It was a pregnant lady and she was homeless. And I was just like, ‘Shoot, I don’t have no money, but I can give you a couple of shirts.’

Malik Willis to the NFL Network

Was having lunch yesterday and saw one of the Combine guys helping out someone on some hard times…@malikwillis being great even when nobody is watching. How can you not be a fan of this guy? pic.twitter.com/BmFzUM66NU

Willis said he didn’t know anybody was watching his spontaneous act of kindness.

Malik Willis to the NFL Network