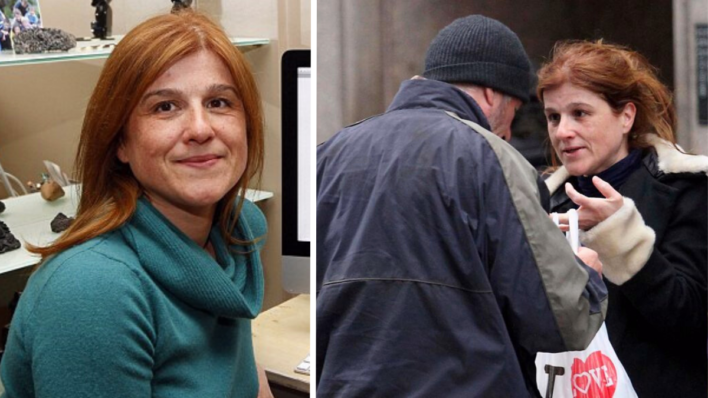 Woman Stops to Give ‘Homeless Man’ Pizza, Doesn’t Realize He Is A Celebrity

It may have lasted seconds, but one woman’s casual moment of caring made the front-page news alongside an A-list celebrity.
By Bryan Liquor    December 17, 2021

It may have lasted seconds, but one woman’s casual moment of caring made the front-page news alongside an A-list celebrity.

42-year-old Karine Gombeau of Paris, France was vacationing with her husband Bruno and their 15-year-old son in New York’s Little Italy when someone stopped the mom in her tracks.

There, near Grand Central Terminal, she spotted who appeared to be a hobo sifting through the trash.

Recalling the events to the New York Post, Gmbeau said her heart sank at the sight.

It leaves me really sad to know we waste food and they have nothing. It really moves me.

And so, she walked up to the man and offered him leftovers from a pizza she and her family had bought earlier. Gombeau repeated the entire exchange with the man.

“I tried to tell him in English, but it came out half in French,” she said.

“He said, ‘Thank you so much. God bless you,’” Gombeau recalled.

Happy with the good deed she had done, Gombeau and her family retreated back to the Salisbury Hotel, where they were staying. She thought nothing of it, until a couple of days later.

Exiting the hotel with her family, a worker handed her a copy of the New York Post. There was Gombeau, offering pizza to Golden Globe winning actor Richard Gere.

It turns out that Gombeau and her family had accidentally stumbled on set of the shooting of Gere’s new movie, “Time Out of Mind,” in which he plays a down-on-his-luck guy named George.

Gere had been in full character, with tattered clothes, beer in a paper bag and eating a burger from the trash can. That’s when Gombeau made her pizza offering.

Looking back, Gombeau said there was maybe one hint that should have tipped them off. “People came from all over the station and told my husband to stop filming,” she said. “People came out of the subways. It was very confusing.”

“She was a complete stranger who just happened to see him acting,” Gere’s publicist told TODAY. “It’s a sweet story.”

Magic happens when you open your heart

Gombeau is still pinching herself.

It was magical . . . It’s crazy, this story. It’s unimaginable that something like this could happen.

While that wasn’t her goal, it’s still nice to know that sometimes a simple, selfless act makes an unforgettable moment that Karine Gombeau will forever keep.

However, Gombeau does have one small film critique.

“I think he’s very handsome, even at his age,” she added. “‘Pretty Woman’ was not my favorite movie, but I ­really loved ‘Chicago.’”

Lead with selflessness
“A hero is somebody who is selfless, who is generous in spirit, who just tries to give back as much as possible and help people.”- Debi Mazar
Tags
Share
← Prev Post Next Post →