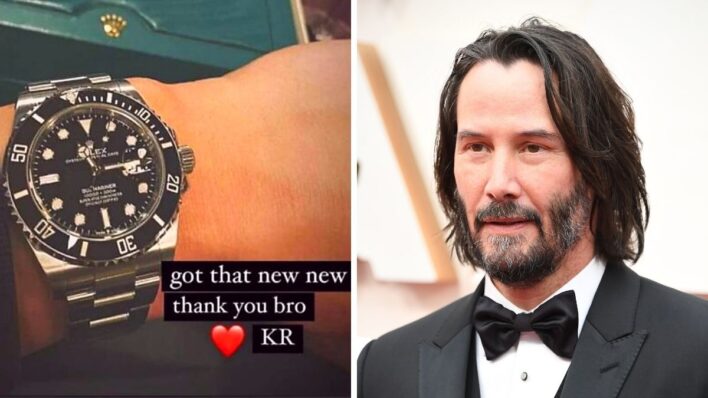 The Matrix actor’s heartwarming gesture for the crew he worked with for his latest movie is a strong reminder to stay humble.
By Joel Balsam    November 5, 2021

The Matrix actor’s heartwarming gesture for the crew he worked with for his latest movie is a strong reminder to stay humble.

For some actors, a fourth installment of an action series might be something to look past and immediately move on from. But not Keanu Reeves.

Keanu Reeves has earned the reputation as one of the nicest guys in Hollywood wherein he continuously takes the people around him, his coworkers, and also his fans by surprise with his heartwarming gestures.

His one such kind deed is going viral.

After wrapping up the filming for John Wick: Chapter 4, the Matrix actor surprised his stunt crew — Bruce Concepcion, Jeremy Marinas, Dave Camarillo, and Li Qiang — with personalized Rolex Submariner watches during a dinner in Paris.

According to Dmarge, the Submariner is a dive watch that’s extremely rare. So rare that waiting lists can run multiple years long.

Marinas shared a look at the watches in his Instagram Stories, calling it the “best wrap gift ever.”

He went on to show the message Keanu had engraved on the watch: “The John Wick Five. Jeremy Thank you Keanu JW4 2021.”

Got that new new thank you bro KR.

This is not the first time a heartwarming act by Reeves has gone viral.

There was the time he shared his unique and inspiring take on death, the time he called everyone “breathtaking,” and then signed a lawn sign by a fan. There was also the time he selflessly went on a road trip with a bunch of strangers.

With each and every viral kind deed by Reeves, it’s a reminder to be humble. No matter how rich and famous you are, we all have to treat others with respect.

Treat everyone with respect
No matter your status in life, everyone deserves to be appreciated and treated with kindness and respect.
Tags
Share
← Prev Post Next Post →