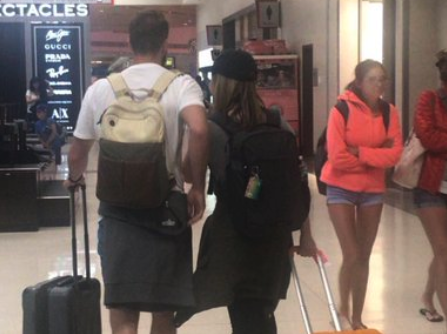 Rosey Blair, actor, writer, tweeter and now possible matchmaker was on a flight to Dallas on July 3 when she
By Eliza Theiss    July 6, 2018

Rosey Blair, actor, writer, tweeter and now possible matchmaker was on a flight to Dallas on July 3 when she asked a random stranger if they could switch seats so she could sit next to her boyfriend.

The woman said yes, and Rosey and her boyfriend joked that perhaps the person to be seated next to her will be the love of her life. Little did they know they were about to predict the future – maybe.

As Rosey and her boyfriend settled in, the woman’s seat neighbor showed up. Before the plane had even taken off, the two strangers were caught up in animated conversation, smiling and hashing out their shared interests.

With no TV on board but armed with WiFi and boundless optimism – and more than a little curiosity – Rosey kept an eye on the cute couple whom she dubbed #prettyplanegirl and #hunkyplaneguy and started tweeting, even buying extra WiFi to keep the internet posted.

Soon, more than 250,000 people had tuned into her live reporting of the possibly bubbling romance for the millennial age. The two newly famous internet stars soon discovered they were both personal trainers and vegetarians, and started talking about their families.

As Rosey remarked, “there were no wedding rings in sight,” which gave her further hope as the two flirty passengers started showing each other family pictures.

As a baby smiled and waved at the two passengers and Rosey continued live tweeting updates, #hunkyplaneguy – whom the internet renamed #planebae – and his seat partner shared a cheese plate while slowly moving closer to each other.

In fact, before the plane landed the kind woman even rested her head on planebae’s shoulder for a second, sending Rosey, her boyfriend and the entire internet into a tizzy.

Feeling a responsibility towards her audience and eager to learn more herself, Rosey followed the two off the plane to see them walk off together.

As the plane love story continued to blow up on social media, even being picked up by major news outlets, the story made its way to planebae, who contacted Rosey.

It turns out his name is Euan Holden and he is a former pro soccer player — a down-to-earth guy who found the online attention and Rosey’s reporting hilarious, albeit somewhat overwhelming.

While Rosey thought she was being rather subtle, it turns out Euan had caught on to her antics.

While #prettyplanegirl has so far decided to remain anonymous, feeling overwhelmed by the massive media attention the plane fling garnered, everybody involved continues to be touched by the countless well wishes and positive thoughts being sent their way from strangers across the world.

Just want to take a second and thank you all for being so kind and supportive these last 24 hours ❤. Haven’t seen this much love from millions of strangers to another in a very long time! #PlaneBae ✈❤