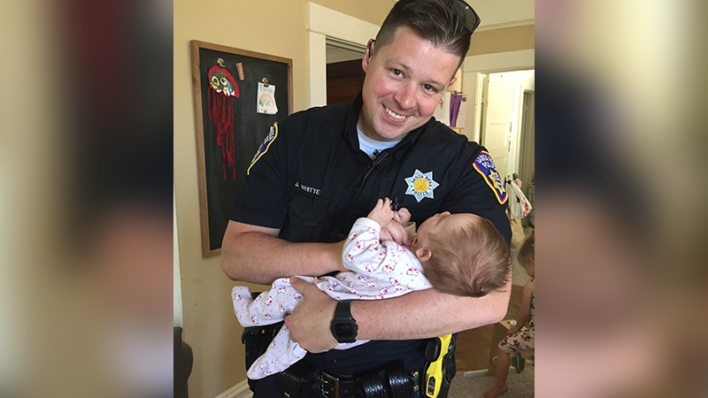 Being a police officer is an incredibly hard job, but also a rewarding one. Sometimes though, it’s rewarding in surprising
By Aly Walansky    September 6, 2018

Being a police officer is an incredibly hard job, but also a rewarding one. Sometimes though, it’s rewarding in surprising

Being a police officer is an incredibly hard job, but also a rewarding one. Sometimes though, it’s rewarding in surprising ways, like in the case of a California police officer who responded to an emergency call of a homeless pregnant woman — and then adopted her newborn daughter.

On one patrol, Whitten’s wife Ashley, was with him and started to chat with the pregnant woman. “I mentioned, ‘Oh, you are pregnant,’ and she said, ‘Oh yeah,’ and placed my hand on her womb,” Ashley said.

A few months later — on Valentine’s Day! — the Whittens received a phone call explaining that the woman had given birth and had asked if Ashley and Jesse would adopt her child. It was a big decision to make, as the couple already have three other daughters.

“She said, ‘I knew you had daughters. I knew you were firm, but you were fair,'” Whitten said. “She had this vision of her daughters playing in tutus with her sisters. That’s what she said she wanted.”

“It’s weird to live in the tension of joy and heartbreak like this story is,” Ashley said. “It’s wonderful at the same time.” The baby, now known as Harlow Masie Whitten, is a part of the Whitten family. “She smiles so beautifully,” said Jesse.

“Her smile is the best thing,” Ashley added. Harlow’s adoption recently became official, and even though she had a few rough patches at first — she was exposed to drugs in the womb — she’s doing great now.

In fact, Santa Rosa Police Department published a photo of Whitten and the newest member of the family. Ashley and Jesse still keep in touch with the birth mother:

“We were talking and –– I was saying to her — ‘You made this choice for her and that we are so grateful,'” Ashley said. “And she said — ‘You’re her mother now.'”

“She loved her daughter enough to give her a family,” she said, “and we were so honored to be that family.”