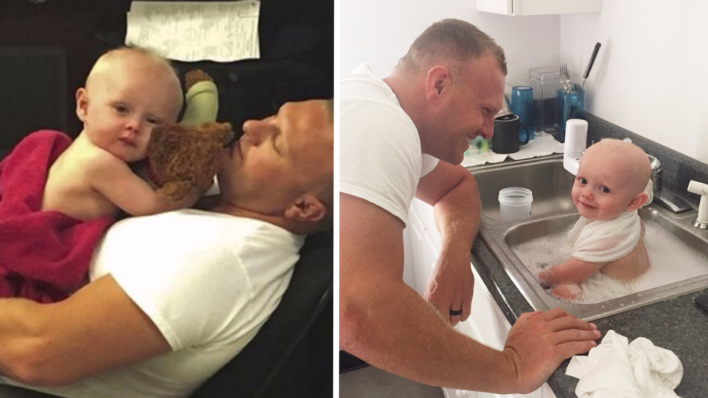 West Virginia police discovered a shocking sight when they looked into a car they had pulled over that day.
By Joel Balsam    December 17, 2021

West Virginia police discovered a shocking sight when they looked into a car they had pulled over that day.

West Virginia State Police were patrolling the town of Princeton when they pulled over a woman suspected of driving while intoxicated. However, as the officer approached the window, they encountered a horrible sight.

There was a baby lying in the back of the car covered in its own vomit.

“We made an arrest for DUI,” trooper B.R. Wood told Bluefield Daily Telegraph. “The 1-year-old baby boy was in the backseat covered in vomit. The vehicle was disabled, so we brought the baby boy back to the detachment.”

As the woman was being processed, Senior Trooper D.C. Graham took the baby to the sink of the detachment’s break room/kitchenette and gave him a bath. Then, he wrapped the baby in a towel and cradled it until Child Protective Services could arrive.

He was the best little baby. He had just started to nod off when CPS (Child Protective Services) arrived.

“Apparently, he had been under the weather for a bit,” Wood added.

The special moment between officer and baby was caught on camera and photos were shared on social media.

After the incident, the baby was placed with a legal guardian and under the supervision of CPS.

Police did their job

It’s difficult to think about what might’ve become of this baby if police hadn’t stepped in. Clearly, the mother was a danger to herself and the child.

But thankfully, police and showed the care and kindness we should expect from people in positions of authority. And hopefully, this dangerous situation inspired the mother to get back on her feet.

care for EACH other
“Caring people help others not because they expect a reward, but because it is natural to show kindness.”- Anonymous
Tags
Share
← Prev Post Next Post →