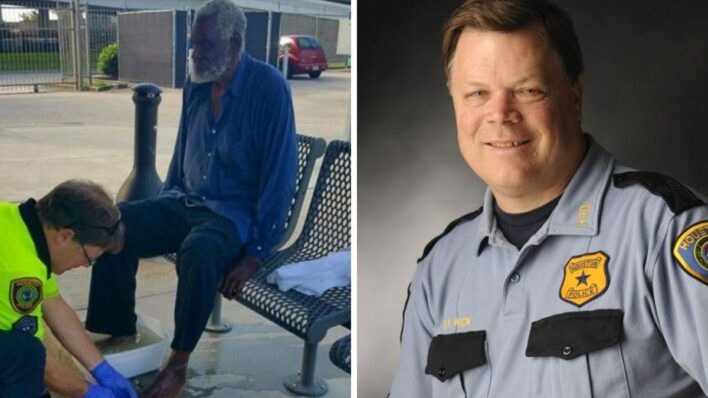 Two Texas police officers went above and beyond to help a man in distress.
By Aly Walansky    October 12, 2021

Two Texas police officers went above and beyond to help a man in distress.

So often, homeless people have to deal with being ignored or ridiculed. They receive unfair assumptions about how they got there in the first place instead of empathy. Yet, there are people that care enough to stop and help them. And those people make all the difference.

Such is the case of Sgt. Stephen Wick and Officer Colin Mansfield, two Texas police officers who answered the call of duty, even if it was not an official one.

Spotted during their patrol

When officers of the Houston Police Department spotted a homeless man on the street during their patrol, they came to halt. They could tell the man, named Quintus, needed help. Not only was he homeless, but he was also blind, old and in poor health.

They decided to take Quintus to the Sobering Centre but their help didn’t end there.

“We cleaned him up and gave him new clothes,” said Sgt. Steve Wick, who is shown in a photo cutting the man’s toenails as he cleaned his feet.

We tried to get his feet in shape so he could put shoes on. His vision deteriorated to a point where he couldn’t function as well anymore.

Help came at the right time

Quintus was so grateful for the help, too. “Quintus, he was happy to get cleaned up,” Wick said. “His whole life he’s been minimally employed, selling the Sunday paper. He’s got glaucoma, so he’s about 95 percent blind. When we found him, he was having difficulty…walking to a thrift shop to pick up new clothes.”

The police can’t help everyone, but it’s what they are trying to, and they are doing so one person at a time. “Ultimately, that’s what we want for everybody,” Wick said. “Police have gotten an black eye in recent years, or months. It makes people feel like police officers are out there to help, rather than to hurt, and we are.”

After that photo was taken, The Homeless Outreach Team brought Quintus to an emergency shelter and set him up with eye doctor visits and other social services to help him get back on his feet again.

Everyone is deserving of empathy. As Sgt. Wick mentioned, he didn’t think much of the gesture in the moment. Helping a person in need was a natural gesture. We should all strive to apply that principle, to look beyond labels and prejudices and treat each other with the utmost empathy.