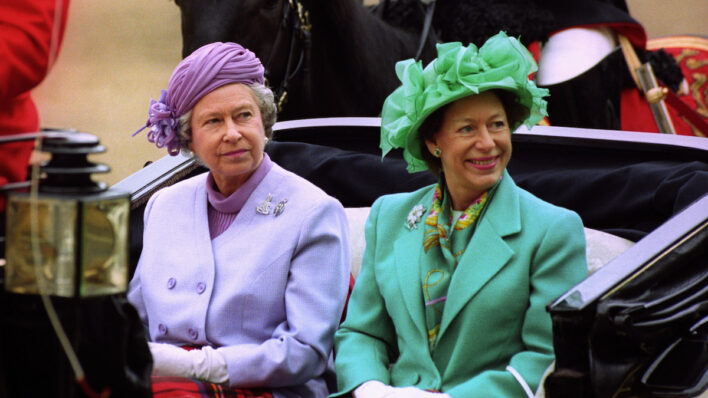 Queen Elizabeth’s younger and only sister, Margaret, is often known as the “rebellious” one. How did the two reconcile their differences?
By Shaoni Das    March 10, 2021

Queen Elizabeth’s younger and only sister, Margaret, is often known as the “rebellious” one. How did the two reconcile their differences?

The British royal family has been a mainstay of popular culture for well over…let’s say, a thousand years.

Yet, the only monarch we’ve known in our lifetimes is, of course, Queen Elizabeth II. She has reigned longer than most of us have been alive, yet she shows no signs of slowing down — even at the age of 94. She’s been an unwavering source of strength for the British people through thick and thin, be it economic recessions, natural disasters, or worldwide pandemics.

In recent decades, the lion’s share of the coverage has been focused on Prince Charles, his ex-wife Diana, and their progeny. But long before Meghan Markle and the Princess of Wales lived another royal who attracted scandal and attention like there was no tomorrow.

The Queen’s younger and only sister, Margaret, is often known as the “rebellious” one, the sister who bent the rules and made her presence known wherever she set foot. So while we commend Queen Elizabeth for her firm, formal, and dependable nature, let’s celebrate the sister who brimmed with more personality than she could handle.

Princess Margaret was born on August 21, 1930, at Glamis Castle in Scotland, making her four years younger than her sister. Hence, the two sisters grew up with a fair bit of sibling rivalry and had as peaceful and normal an upbringing as the circumstances would allow. Neither of the sisters had expected their father, Albert George, to succeed his older brother as King of the throne, but due to the latter’s abdication, the sisters and their family were thrust into the spotlight far earlier than expected.

Growing up, Margaret had always played second fiddle to Elizabeth and carved out her unique place within the royal family. Seeing how she was never expected to be Queen (being the younger sister), she could exert more freedom in her personal and professional life. Unlike Elizabeth, who married at 21, Margaret remained the Crown’s most eligible bachelorette until 30.

She had allegedly had short-term courtships with as many as 30 men, but none of them stuck out to her as a potential husband. That is, until she met a member of her father’s staff, Group Captain Peter Townsend.  She had first met him when she was just 13 and fell in love with him in 1947 during a tour of South Africa.

It’s alleged that the two started seeing each other while Peter was still married to his first wife, Cecil Rosemary Pratt. Peter divorced Cecil in 1952 and was engaged to Margaret just a year later.

Margaret’s engagement with Peter was talk of the whole town and was encumbered with controversy. First of all, he was 15 years her senior and had had two kids from his first marriage. At the time, members of the royal family were not allowed to marry people whose ex-spouses were still alive — an archaic rule maintained by the Church of England.

As a result, Margaret’s engagement with Peter was delayed and then halted altogether. Several factors may have triggered this termination, but ultimately, there was no way that Margaret could marry Peter and still be an accepted member of the royal family or the Church of England. The Queen and the Parliament explored a range of avenues that would make the marriage feasible and valid, yet Margaret and Peter broke it off and went their separate ways.

After her first engagement fell through, she married infamous playboy Tony Armstrong

Following their split, Margaret once again carried on flings with many members of England’s high society, yet once again, none of them excited her in the same way, and she said no to suitors one after the other.

She met Antony Armstrong Jones, a photographer, at a dinner party in 1958. Antony himself was yet another controversial companion, but for very different reasons. He was rumored to be a playboy of the wildest kind and was reported to have slept with many women and men prior to marrying Margaret. He had even fathered a child with a married woman before marrying Margaret, whose paternity was only revealed a few years back.

Their wedding was the first royal wedding ceremony to be televised, and Tony was one of the first commoners to be married into the upper echelons of the royal family. Though Margaret and Antony were initially happy and had welcomed two children, their marriage was fraught with complications. It’s reported that Margaret’s excessive partying bothered Tony, whereas his overworking, extramarital affairs, and general sexual conduct annoyed Margaret. At the end of the day, they were simultaneously too similar and too disparate to work as a couple.

[Margaret and Tony] were both pretty strong-willed and accustomed to having their own way, so there were bound to be collisions […] She expected her husband to be with her more, but one of Tony’s strongest motivations was work.

Affairs ensued from both parties, and eventually, the marriage fell through — despite the occasional bouts of passion.

Any other couple would understandably seek divorce while facing such irreparable challenges, but the royal family has strict protocols against divorce, which was considered a colossal taboo by the Church of England until the early 2000s.

So Margaret and Tony were somewhat forced to continue with the sham of their marriage, if only by name. Outside their marriage, they were free to take up affairs with anyone they met, and so they did.

Margaret commenced a romantic relationship with gardener Roddy Llewellyn, a 25-year-old man she met in Scotland. The relationship continued on-and-off while Margaret was still married to Tony. In February 1976, Margaret was pictured with Roddy frolicking on the beach on a Caribbean island. The tabloid’s photos drew tremendous ire among the general public as well as among prominent politicians, many of whom called Margaret a “floozy” and a “royal parasite.” Some even suggested removing her from the royal family altogether.

When the princess met Roddy Llewellyn, they unexpectedly hit it off, and he provided her with something she hadn’t had: affection and, from her point of view, love.

Christopher Warwick on The Cut

While in a relationship with Roddy, Margaret overdosed on sleeping pills on one occasion, which some biographers described as a suicide attempt. On May 24, 1978, Margaret was finally granted a divorce from Tony, becoming the first high-profile British royal to divorce.

Margaret wasn’t the only royal to have had marital troubles, but she was the only one who followed through on divorce in the face of criticism and adversity. Elizabeth and her husband Phillip have also had numerous issues throughout their marriage, but

Elizabeth would never defy a royal custom to fulfill her own wish. Margaret has enough willpower to do so, and as a result, she was crucified for it.

Margaret was “wayward” and “naughty,” but Elizabeth’s love never faltered

In an interview with The Cut, Margaret’s biographer Christopher Warwick said that Margaret bridged the gap between two worlds in a fascinating fashion. Sometimes she was the high-nosed, intimidating princess who felt entitled enough to speak her mind and belittle her company as she pleased; sometimes, she was the poor-little-rich-girl imprisoned in a world of rigid tradition, structure, and judgment, dying to live her life on her own terms.

She drank, smoked, and partied harder than any other royals, which is perhaps why her health had begun to deteriorate during her fifties. Her personal decisions prompted a great deal of humiliation, anxiety, and shame among the royal family. Her long list of lovers generated far too many scandals in the British press. Yes, Margaret was “cheeky” and “naughty,” according to Warwick — it’s why we still discuss her to this date.

Yet, despite their differences, Elizabeth never left her sister’s side. In fact, she did her best to ensure Margaret was happy, fulfilled, and respected.

The queen, even when they were girls, always kept an eye on her sister because Margaret could be wayward […] In terms of personalities, Elizabeth and Margaret were as different as chalk and cheese. But despite that, there was never any break in the bond between them. There was great love between them.

Christopher Warwick on The Cut

They might be royals of the highest degree, but their bond as sisters mirrors that of any other pair. Elizabeth and Margaret were born and raised under the same circumstances, yet they turned out to be more different than anyone could have ever imagined. Yet, their differences didn’t force them apart. It only strengthened their love for each other. Knowing that her younger sister was prone to attracting trouble, Elizabeth’s love and protective sensibilities had only gotten stronger.

We have to remember that our differences with our significant other, or our sibling, or even our parents, are not the be-all and end-all. The same differences could be what brings you together, what enables both of you to learn from each other, listen to each other, and take care of each other. Embrace your differences because that’s what makes you unique at the end of the day.

More about the royals: