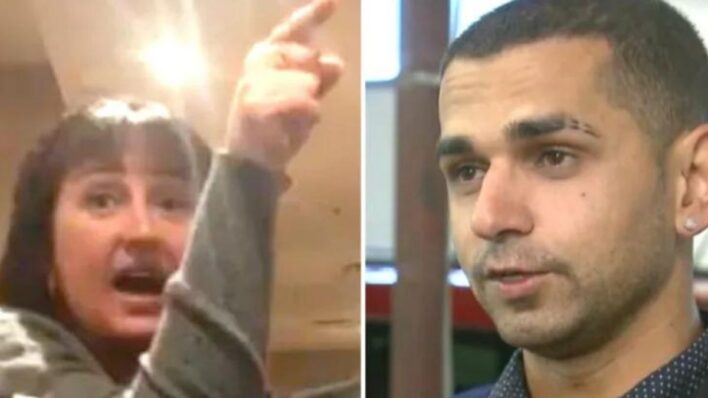 ‘Speak English Or Don’t Speak At All’ – Woman Attacks Man At Denny’s, Instantly Regrets It

Heart overcame hate when a community rallied around one if its own in the face of one unhinged woman. Foreign
By Bryan Liquor    July 29, 2021

Heart overcame hate when a community rallied around one if its own in the face of one unhinged woman.

26-year-old Monir Omerzai has been a proud Canadian citizen for over 15 years since immigrating to Alberta from Afghanistan.

He was out with some friends at a local Denny’s restaurant, talking smack after an intense night of video gaming when things got ugly.

Unbeknownst to them, speaking their mother tongue angered some people, like Kelly Pocha of Cranbrook, B.C.

She recalled to CBC news that the men “started talking in their own language” and began laughing, which she thought was directed at her. The disturbing events that followed were captured on video.

Turning back at the men, Pocha pointed her finger at them saying “Speak English or don’t speak at all,” and that she’s not “one of your Syrian b*tches right now.”​

The video went viral, prompting a backlash against Pocha. She was fired shortly after (though she has since been rehired), while Denny’s apologized for the incident.

The ugly incident also prompted calls from community leaders for us all to do better.

The CEO at the Centre for Newcomers Anila Lee Yuen was one of them.

“I’d like to see people having conversations, in a less public kind of a sphere, where people can talk about the impact that that really had, where it’s not necessarily blaming as much as it is dialoguing, to be able to come to a joint understanding.”

“If we as a society stand up for one other and stand up for what’s right in this country, I think that’s a step in the right direction,” he said.

We’re all in this world together

Omerzai has been overwhelmed by the positive vibes.

Pocha had since said that had been drinking that night and that she would “take it back, I would. But I can’t,” adding that she’d like to apologize to the group.

Omerzai has some precious advice for those like Pocha and everyone.

“Have more friends from different cultures. Get to know them, talk to them, sit down with them. You should get to know people before you judge them.”

He’s right: you fight ignorance and hate with respect and understanding. If you do, you’ll realize that in the end, we’re all just here with a short timeshare on earth. Let’s spend time spreading smiles and not tolerate hate.