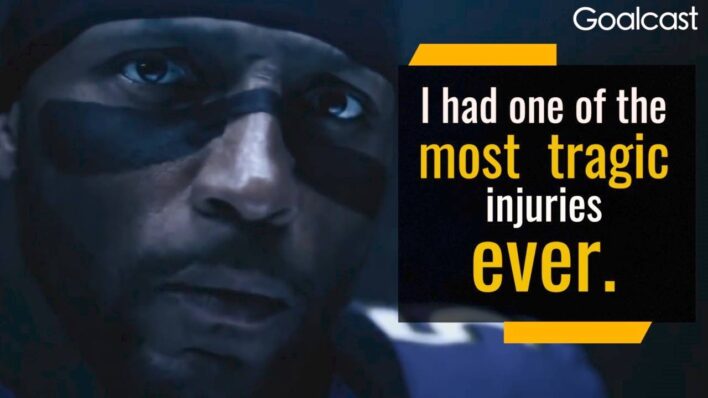 Ray Lewis – Fight Your Fight Ray Lewis uses the story of David and Goliath to show the importance of
By Goalcast    June 28, 2017

Ray Lewis uses the story of David and Goliath to show the importance of fighting your own fights, and says the effort is what defines you more than wins or losses.

“I had one of the most tragic injuries ever. I couldn’t help my team. The leader was took away, so there could be doubt. I want you to research the story of David and Goliath. I want you to understand what the king told David when he put on the armor and he said, ‘I want you to fight Goliath with this armor because he’s huge. He’s nine foot tall.’ David said something that was very key to the king. He said, ‘King, I can’t fight your fight. I’ve got to fight my fight.’ It’s about fighting our fight. It ain’t about wins or losses. It’s about loyalty. It’s about understanding I’m going to make the play or I’m going to watch the play be made. It’s simple. It’s if I can tell my safety you cover this if I’m going this time.

“It’s a man-on-man every time you play the game. It’ll never change. It’s about winning one-on-one battles. Fight your fight. It’s our fight to fight. One and six doesn’t define who you are. What defines who you are is what you do when you’re one and six. What demand you will fight for. That’s everything you’ve got today. Not because of the Super Bowl, but because when this game ends, you’ll have a brother to call for life. Knowing you gave everything you had. That’s why you play as a Raven. That’s why you fight as a Raven. That’s why nobody what nobody on the outside says. David found a way to fight his fight. Fight your fight.”