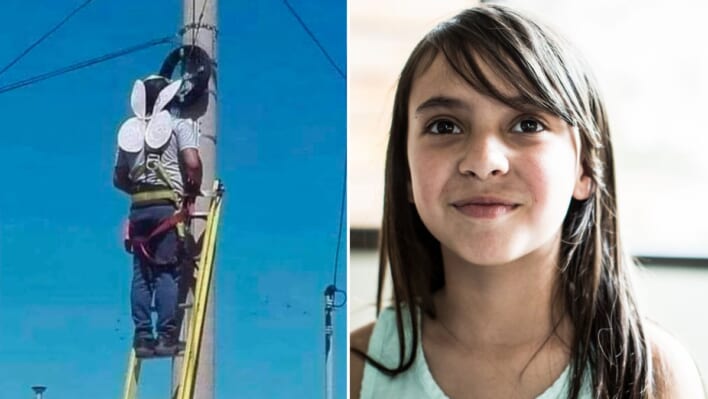 A little girl makes her dad promise to wear the wings to keep him safe on dangerous jobs.
By Sophie Babinski    October 26, 2022

A little girl makes her dad promise to wear the wings to keep him safe on dangerous jobs.

Fathers make it their life’s mission to protect their daughters at all costs. A recent story flipped the script and showed how a daughter’s loving quest to protect her father touched the hearts of many.

A Guardian Angel Looking Out for Her Dad

Onlookers noticed a man working on the power lines wearing something that looked like a Halloween costume. The worker was wearing a plain t-shirt and pants, but he wore angel wings on top of his shirt. Looking like some sort of electricity angel, people wondered why he had chosen to wear such a costume.

RELATED: Struggling Single Dad of 4 Owes $168,000 – His Mortgage Provider Makes an Announcement That Shocks Him

It turns out that the reason the worker was wearing the wings was sweeter than anyone could have imagined. He had been discussing his life and his day with his daughter, when he explained that he spent each day working high up on a ladder. His daughter was alarmed and afraid that her hero might fall and hurt himself, so she had an idea– her dress-up box held the key to keeping daddy safe!

The Powerful Wings of Love

The electrician’s daughter gave her father some angel wings and made him promise that he would wear them every day in order to keep himself safe up on his ladder. Her dad promised he would. He never broke his promise, wearing the wings every day, rain or shine.

The love his daughter has for him is a powerful force that keeps him safe daily. The symbol of her love, her angel wings, reminds him daily how much she cares for him and relies on him.

This story is further proof that fathers and daughters have a special bond that nobody can deny.