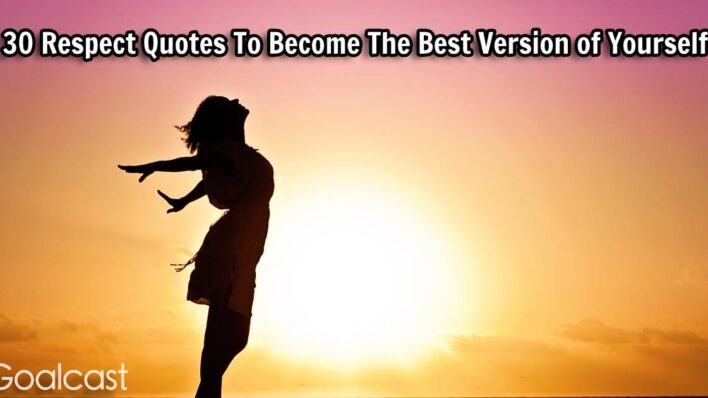 30 Respect Quotes To Become The Best Version of Yourself

Chose to become someone who cares about other people’s rights and feelings. Here are 30 respect quotes that will make you want to become a better person.
By Flavia Medrut    September 3, 2020

Chose to become someone who cares about other people’s rights and feelings. Here are 30 respect quotes that will make you want to become a better person.

We’re at the peak of our civilization and we’ve got speakers everywhere telling us to be kinder to each other. Yet it appears that respect is rather declining. Everybody wants respect, but too few are willing to offer it back.

For some reason, a lot of people have become meaner and more self-centered. They can’t stand others having different opinions, looking or acting different. A simple post on social media can trigger an “online war” where people from all around the world would trash each other for nothing.

Respect is about accepting people for who they are, even when they’re different from you or when you don’t agree with them. Acknowledging other people’s worth will bring you in exchange the admiration you want and it will also help you build trust and stronger relationships.

As a reminder of the importance of being polite and respectful, we’ve put together a collection of wise respect quotes. Read them and chose to become a person who cares about other people’s rights and feelings, a person who commands but also offers respect.

Here are 30 respect quotes to make you want to become a better person:

Knowledge will give you power, but character respect.

Respect yourself and others will respect you.

If we lose love and self-respect for each other, this is how we finally die.

Nothing is more despicable than respect based on fear.

I firmly believe that respect is a lot more important, and a lot greater, than popularity.

Never respect men merely for their riches, but rather for their philanthropy; we do not value the sun for its height, but for its use.

I don’t care if you’re black, white, straight, bisexual, gay, lesbian, short, tall, fat, skinny, rich or poor. If you’re nice to me, I’ll be nice to you. Simple as that.

One of the most sincere forms of respect is actually listening to what another has to say.

The bond that links your true family is not one of blood, but of respect and joy in each other’s life.

This is the final test of a gentleman: his respect for those who can be of no possible value to him.

If you want to be respected by others, the great thing is to respect yourself. Only by that, only by self-respect will you compel others to respect you.

A child who is allowed to be disrespectful to his parents will not have true respect for anyone.

Responsibility and respect of others and their religious beliefs are also part of freedom.

It takes no compromising to give people their rights. It takes no money to respect the individual. It takes no survey to remove repressions.

It is the way one treats his inferiors more than the way he treats his equals which reveals one’s real character.

When you practice gratefulness, there is a sense of respect toward others.

You can demand courtesy but you have to earn respect.

A person’s a person, no matter how small.

Watch this Goalcast video if you need radical change:

I have no right, by anything I do or say, to demean a human being in his own eyes. What matters is not what I think of him; it is what he thinks of himself. To undermine a man’s self-respect is a sin.

Respect is one of life’s greatest treasures. I mean, what does it all add up to if you don’t have that?

We don’t need to share the same opinions as others, but we need to be respectful.

Respect begins with this attitude: I acknowledge that you are a creature of extreme worth.

We must express ourselves in ways that demonstrate our respect for others.