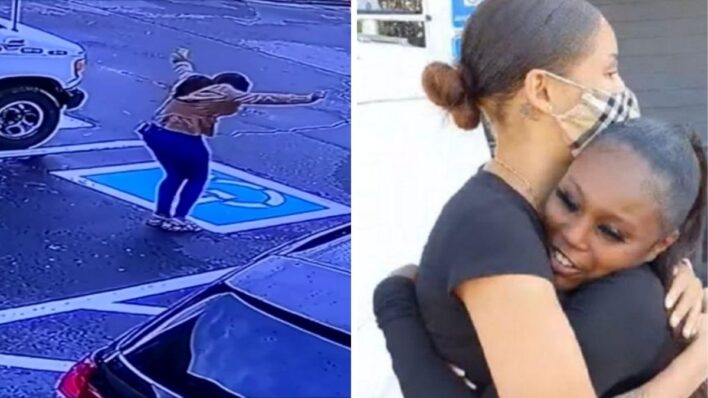 She got the job and inspires others to celebrate their own achievements.
By Joel Balsam    December 6, 2021

She got the job and inspires others to celebrate their own achievements.

She was nervous before her interview

For two years, 21-year-old Kallayah Jones was homeless. She jumped from one house to another, but couldn’t earn enough cash to get a place of her own.

Finally, she had a chance at a job—to be a server at The Spot Sports Bar and Grill in Georgia.

“I was having anxiety attacks and weak parts before I came to the job interview,” she told Today. “My boyfriend was like hey calm down, be yourself.”

When the job interview happened, Jones was herself. This was noticed by the restaurant manager, Dakara Spence, who was impressed by Jones.

“She had like a great energy, I felt it when she walked in, she seemed really positive,” Dakara said.

She was so confident that the interview went well that she did a little dance in the parking lot.

But little did she know her “happy dance” was caught on the restaurant’s security camera.

I was excited. When I got outside, I didn’t know that the cameras caught me.

Hired on the spot

As soon as Dakara Spence, the manager that interviewed Jones, saw that video she wanted to hire the candidate.

“I saw myself in her,” Spence told Today, adding that she also had spent time experiencing homelessness.

“When she came in the interview with her scarf on. I know what that’s like,” she said.

“Nobody should be judged by anybody.”

Dakara went on to announce the news to her new hire.

“I called her phone and I said ‘I’m going to hire you and I seen your happy dance, so you can continue dancing’ and she was just screaming through the phone. It was a beautiful moment for me,” she announced to Jones.

After her video and story went viral, Jones was asked about how to do her dance and when people should do it.

“Anytime you’re happy. Anytime you get a blessing. Anytime you had a great opportunity and had something you’ve been working towards for years or months or whatever you’re praying for, just dance. It don’t matter what it is,” she said in another interview.

But it doesn’t have to be her particular dance.

“Do your dance. Do that dance. Do every dance, ok?”

Do your happy dance

Jones’ story is a reminder that homelessness can, unfortunately, happen to anyone (even though we have the means to eradicate it!). But it’s also a reminder to celebrate every little victory in life—whether it’s a new job, an assignment completed, or any of life’s many joys.