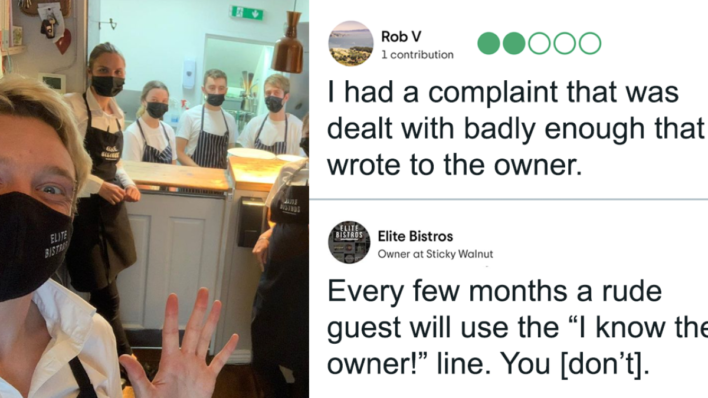 Proof that the customer isn’t always right. Review describes great food, but Ryanair-style management So many of us rely on
By Joel Balsam    September 9, 2021

So many of us rely on reviews to determine where to eat. The thing is, oftentimes the bad reviews are about an extremely specific situation that probably would never happen again or they make no sense at all. Still, good and bad reviews seem to level themselves out.

In the case of Sticky Walnut in Cheshire, reviews on TripAdvisor portray a damn good restaurant. The Modern European restaurant scores 4.5 out of 5 stars for nearly 2,000 reviews. On Google Maps, it’s much of the same with a rating of 4.7 out of almost 500 reviews. The restaurant has also received accolades outside of customer reviews, ranking in the top 100 for the National Restaurant Awards in the UK.

But if you dig into the reviews on TripAdvisor, as BoredPanda did, there’s one two-star review that stands out. In the July 2021 review titled “Excellent food let down by Ryanair style management,” which has since been taken down, the reviewer describes how the food is “very, very tasty,” but the “restaurant management doesn’t give a toss about customer experience.”

The review continues: “A restaurant that aspires to offer fine dining experience but has lost the ability to empathize with customers and ignores them when they complain? That really is a shame.”

The owner claps back

What’s unique about this review is that the owner of Sticky Walnut responded, and oh, what a response it was.

“For goodness sake Robert. I’m supposed to be in TwitAdvisor retirement so let’s not waste any time,” wrote the owner, Gary Usher. “After all, you’ve waited 11 years since joining Twitadvisor to write your first review. Rob, you reserved a table on a Friday evening and agreed to a 1 hour-45 minute time slot. A standard practice, particularly on busy periods, that guests and restaurants worldwide agree to. After your dessert course, the manager, who you said ‘doesn’t give a toss,’ gently reminded you that we would need the table back shortly. You ignored the manager and proceeded to order another round of drinks.”

“Perhaps if your party had arrived on time for your reservation this could have been avoided.”

Usher continued to explain how the manager came back to politely ask the group to leave, but the reviewer, Rob, got up out of his seat, towering over the manager and pointing at him in the face.

“Sir, can you please stop pointing in my face,” the manager said, but the customer and his mother responded by saying he wasn’t qualified to do his job.

The reviewer then had the balls to ask for free drinks before saying he’d contact the owner, who he’s allegedly friends with, about the situation.

Usher revealed that, of course, Rob isn’t his friend.

Every few months in a restaurant a rude guest will use the ‘I know the owner!’ line to try and intimidate team members and bully them into thinking that they will get into trouble because they didn’t look after the owner’s ‘friends’ well enough,” said Usher.

“I did ‘give a toss’, but not about you Rob, but about the way you treated the team,” the owner added.

“So instead of replying to you we chose to block your number, and your mum’s, and put a note on our booking system to not accept any future bookings from you.”

Finally, Usher defended his manager. “With regards to the manager who ‘doesn’t give a toss’ they have managed Sticky Walnut for the last 8 years. Coincidentally the same length of time that Sticky Walnut has achieved a top 100 position in the National Restaurant Awards in the UK. I think that makes them both extremely deserving to be the manager and absolutely qualified to hold that position.”

Usher then signed off with “Not your mate, Gary — another owner you don’t actually know.”

Stand up for yourself

We always hear that the first rule of business is the customer is always right, but in reality, they aren’t.

This entitled customer thought he could do whatever he wanted despite agreeing to the restaurant’s Friday night policy, and then he thought he deserved free drinks. And if all that wasn’t enough, he left a poor review that could discourage others from visiting Sticky Walnut.

The lesson here is not to fight back against every critique — criticism can make you stronger. But that it’s important to stand up for yourself and for those you respect.