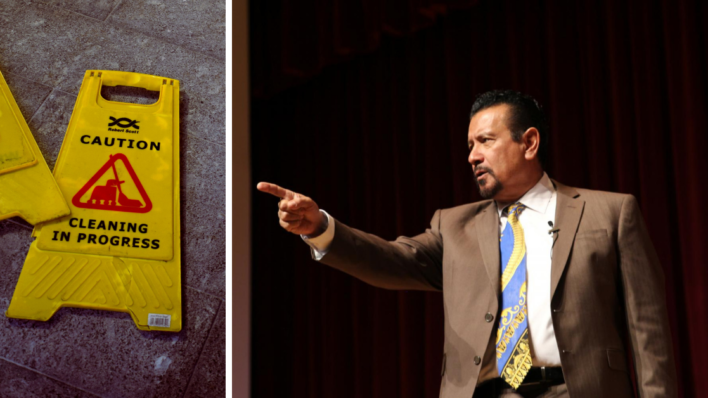 In an incredible story about self-belief and seizing opportunity, Richard Montañez went from being an illiterate janitor to one of
By Bryan Liquor    December 31, 2020

In an incredible story about self-belief and seizing opportunity, Richard Montañez went from being an illiterate janitor to one of the most successful Latino executives in the world.

For a young Richard Montañez, family gatherings consisted of picking grapes under the California sun, then sleeping every night sardined in a one-room shack.

“There was no dream where I came from.”

As an immigrant knowing little English, going to class wasn’t any easier. “I remember my mom getting me ready for school and I was crying,” he told Lowrider magazine.

Then, at age 18, with no education or real future, opportunity knocked.

Montañez heard that snack giant Frito Lay was looking for a janitor just down the road from his house. Since he was illiterate, his wife filled out the application for him. After speaking with the manager, he landed the job.

When he broke the news, his grandfather shared some advice. “Make sure that floor shines,” he told his grandson. “And let them know that a Montañez mopped it.”

“I realized there’s no such thing as ‘just a janitor’ when you believe you’re going to be the best.”

Then, one day at work, Montañez saw a corporate video by then-CEO Roger Enrico containing a challenge for all employees to ‘act like an owner’ and devise ways to improve the company.

The message resonated with Montañez. A lightbulb went off when he noticed a lack of products catering to Latin tastebuds, especially within the company’s flagship Cheetos brand.

“Nobody had given any thought to the Latino market,” recalls Montañez. “But everywhere I looked, I saw it ready to explode.”

And so Montañez acted like an owner. Taking home some unprocessed Cheetos, he whipped up his own Latin recipe with chili and other spices.

The phone call that changed everything

Oblivious to implicit rules, Montañez called Roger Enrico to discuss his spicy idea. He got past his assistant, and moments later he was pitching the company chief.

It went well, and a business presentation in front of the company’s top execs was arranged.

Two weeks later, Montañez was in Frito-Lay’s boardroom, “a janitor presenting to some of the most highly qualified executives in America.”

“I was shaking, and I damn near wanted to pass out,” Montañez recalls. Despite that, he pushed through his presentation.

The outcome was uncertain until CEO Enrico turned to him.

“Put that mop away, you’re coming with us.”

Montañez is now the vice president of multicultural sales for PepsiCo America, and has developed products for KFC and Taco Bell. His story has been featured in magazines and a biopic on his life is in the works.

He is involved with many community youth programs that promote education and self-confidence.

Be yourself. Everyone else is taken.

Montañez didn’t have the same education or privileges as others.

His edge was knowing his value and never letting anyone or anything diminish it. If he would have second-guessed that for a moment, he never would have been the success he is today.

When you believe in yourself, others will believe in you. Positive thinking and manifesting is a great way to bring yourself there.

“I believe that we all have the capability of being a genius when we are born, but somewhere along the line the world starts to tell you that you’re not, or you can’t be. I don’t think you should ever let someone else dictate how great you can be.”