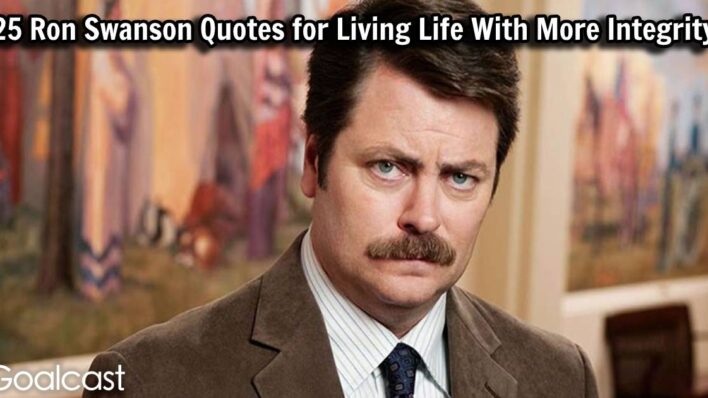 You can’t love “Parks and Recreations” without liking cynical, yet downright funny Ron Swanson. Here are 25 Ron Swanson quotes for living your life with more integrity.
By Flavia Medrut    October 13, 2020

You can’t love “Parks and Recreations” without liking cynical, yet downright funny Ron Swanson. Here are 25 Ron Swanson quotes for living your life with more integrity.

Ron Swanson is a fictional character portrayed by actor Nick Offerman in the successful political satire sitcom, Parks and Recreation.

Ron is a man’s man. He enjoys woodworking, fishing and hunting, but he also secretly moonlights as a jazz saxophonist named “Duke Silver”. At the office however, Ron wouldn’t let his co-workers see his soft side. On the contrary, he prefers being alone and has a rather steely attitude toward his colleague.

As the Director of the Pawnee Parks and Recreation Department, Ron is a strong advocate for small government, He believes that too many resources are wasted daily for nothing so while he was in charge, Swanson did his best to bring the department under budget.

Cynical, yet downright funny, he is the kind of guy that can’t easily be fooled. He is honest, goodhearted and he definitely knows how to motivate his co-workers. One of the most valuable lessons he teaches us is that is no point in doing too many things at once if we can’t handle them. It doesn’t matter if you do only one thing, as long as you do it right.

Here are 25 Ron Swanson quotes for living your life with more integrity:

There’s only one thing I hate more than lying: skim milk. Which is water that’s lying about being milk.

The only thing that’s important at the end of the day is what’s on your gravestone — Your name.

You chose a thankless job, you can’t be upset when nobody thanks you. Don’t start chasing applause and acclaim. That way lies madness.

I regret nothing. The end.

I’d wish you the best of luck but I believe luck is a concept created by the weak to explain their failures.

Saltwater will warp the wood, so keep your tears in you eyes where they belong.

It’s always a good idea to demonstrate to your coworkers that you are capable of withstanding a tremendous amount of pain.

One rage every three months is permitted. Try not to hurt anyone who doesn’t deserve it.

Under my tutelage, you will grow from boys to men. From men into gladiators. And from gladiators into Swansons.

I’ll take that steak to go. Please and thank you.

The less I know about other people’s affairs, the happier I am.

I prefer quality over flash — that’s why I refuse to write my signature in cursive.

Live your life how you want, but don’t confuse drama with happiness.

My idea of a perfect government is one guy who sits in a small room at a desk, and the only thing he’s allowed to decide is who to nuke. The man is chosen based on some kind of IQ test, and maybe also a physical tournament, like a decathlon.

Friends: one to three is sufficient.

I don’t want to paint with a broad brush here, but every single contractor in the world is a miserable, incompetent thief.

If any of you need anything at all, too bad. Deal with your problems yourselves, like adults.

There are only three ways to motivate people: money, fear, and hunger.

Give a man a fish and feed him for a day. Don’t teach a man to fish…and feed yourself. He’s a grown man. And fishing’s not that hard.

I also think it’s pointless for a human to paint scenes of nature when they can go outside and stand in it.

Crying: Acceptable at funerals and the Grand Canyon.

When I eat, it is the food that is scared.