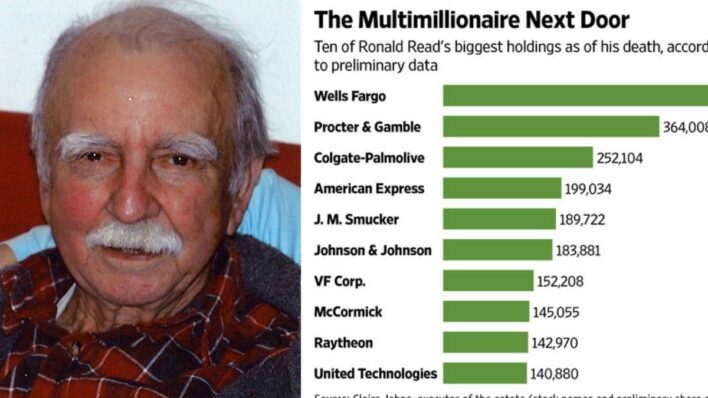 One unassuming man left a generous legacy for an entire town.

By all accounts, Brattleboro Vermont resident Ronald Read was a simple man who lived by simple means.

Working part-time as a janitor at JC Penny, he drove to work every day in his most expensive possession, a $5,000 second-hand Toyota Yaris.

Ellen Smith, who befriended him while working at the Brattleboro Memorial Hospital, remembers his daily routine.

“He’d order the same thing each morning – a cup of coffee and an English muffin with peanut butter,” she recalled to TODAY.

She also added that his wardrobe was in tatters.

“He would wear winter coats with safety pins keeping them closed.”

When Read passed away at age 92, his estate lawyer Laurie Rowell wasn’t expecting much.

“Initially, he told me that he had money and I didn’t really think so because of the way he dressed,” she told TODAY.

She even recalled that despite his failing health, “he had parked far enough far enough away that he didn’t have to pay the [parking] meter.”

And so, nothing prepared Rowell or Read’s own family for what they discovered. The simple janitor had amassed an incredible $8 million fortune!

It turns out that Read had a talent for stock-picking. Decades of shrewd investments and patience helped build his fortune.

The library’s director, Jerry Carbone, was floored: “It was like a thunderbolt”

“To know that he was worth $8 million — and also that he left so much to this hospital — was just amazing, and incredibly generous,” she added.

Never judge someone by appearances

Rowell recalls how important protecting his savings was to Read.

“He really wanted that money to be taken care of, because it represented so much of what he had worked for, throughout his life,” she said. “He was very fearful of it being squandered.”

Yet, arguably, Read’s biggest legacy is a lesson that we can all learn from.

That is, never judge someone by the car they drive, the clothes they wear or the way they talk. Just like Ronald Read, they might remember your kindness and repay you in spades on day.