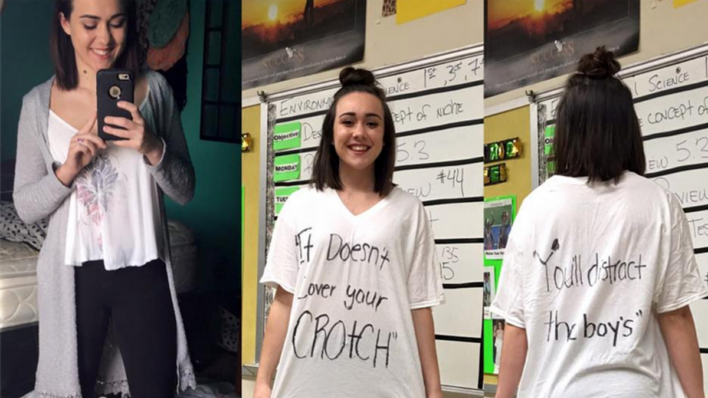 A student in Oklahoma protested her school’s sexist dress code policy by making a fool out of the administration. Sent
By Joel Balsam    April 23, 2021

A student in Oklahoma protested her school’s sexist dress code policy by making a fool out of the administration.

One day back in 2015, a teenager named Rose Lynn went to her school in Lawton, Oklahoma, wearing black leggings, a T-shirt, a long cardigan, and boots. While her outfit seems harmless enough, she was sent home by teachers because the shirt didn’t cover her crotch.

“Today I was sent home from class, after being in school for two hours, for my outfit,” Rose wrote in a Facebook post that went viral when it was first posted but has since been taken down. “Because I’m developed [more] than the average girl my age, I am required to go home and change. Yet, if I was skin and bones or overweight (not to offend anyone) I would be overlooked and no comment would be made (at my particular school) because ‘they must do that to feel better about themselves and they crave attention.’ But because I look like a curvy woman and may distract young boys, I have to miss class and change my outfit.”

To make matters worse, Rose Lynn was sent home before she could do her 20-minute algebra exam, so had to miss the test.

She got her revenge

When Rose Lynn came back to school, she wore something that had little chance of distracting the boys (or adults) — an oversized shirt that covered her crotch and black leggings.

“I was completely covered crotch, butt, cleavage, etc. (even though the only problem was the crotch),” she explained, according to Yahoo.

She was still taken out of class by two principals and three teachers and scolded, but not for how revealing her clothing was. It was due to what was written on her shirt.

“They were upset because I was ‘mocking them’ and they didn’t appreciate it,” she wrote on Facebook.

On the shirt, she’d quoted the reasons why she was suspended in “silent protest.” The front read, “It doesn’t cover your crotch” and the back said, “You’ll distract the boys.”

Rose Lynn was subsequently sent home again with the principals and teachers saying it was because she didn’t have her student ID, which was left in the classroom she’d been called out of.

“Once again, society has failed to advocate [for] young ladies, by confining them in a box, where they are stripped from their sense of self-respect and self-expression, rather than teaching young men to respect the boundaries of young ladies. My response: #‎Feminism#‎YoullDistractTheBoys#‎SocietyIsFailing,” Rose Lynn wrote.

Following the incident, Rose Lynn committed to wearing oversize shirts with leggings, but says other students with less curvy bodies were not punished.

“If she was built like a board or as round as a ball she wouldn’t have been sent home but [since] she has a figure she was told she had to change,” he said.

Miles went on to blame the school — not a teenager — for their actions.

“This is 100% on [Lawton Public Schools] because they have left the rule up to interpretation,” he said. “She has been taught that if you believe in something, do what you must and be prepared for the consequences. She has done that.”

While 2015 might feel like a long time ago, a teenager was sent home from school for wearing a turtleneck(!) just this February, proving that there’s still work to be done. Still, I don’t imagine this school in Oklahoma will be as strict with their dress code after Rose Lynn and her dad completely shut them down.