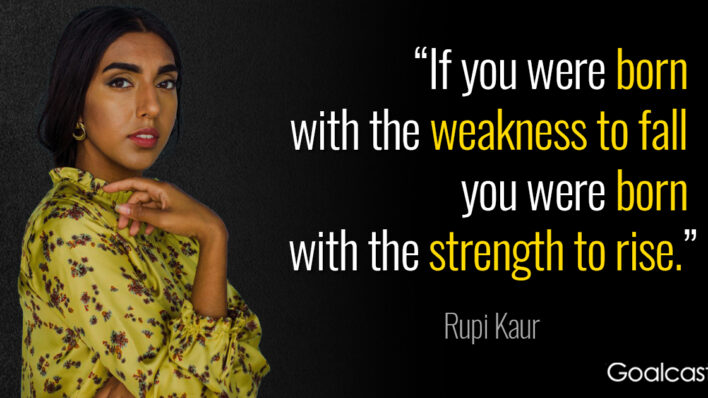 16 Rupi Kaur Quotes About Love, Life and Everything in Between

Young Rupi Kaur is an Indian-Canadian poet, writer and illustrator. Four years ago, she self-published Milk and Honey – a
By Flavia Medrut    March 13, 2018

Young Rupi Kaur is an Indian-Canadian poet, writer and illustrator. Four years ago, she self-published Milk and Honey – a

Young Rupi Kaur is an Indian-Canadian poet, writer and illustrator. Four years ago, she self-published Milk and Honey – a book of poetry and prose that depicts themes such as love, abuse, heartbreak, healing and feminism. By 2017, over one million Milk and Honey copies were sold, and the book was ranked number one on The New York Times best sellers list — such a wonderful achievement for such a young writer, if you ask me.

As a child, Rupi Kaur used to write poems for her friends and while in high-school, she started to share her work anonymously. Kaur was criticized for writing in lowercase and using only periods; her response to critics was that she chose to write this way in order to honor her culture. Her second book, The Sun and Her Flowers, was released in 2017.

At the age of 25, Rupi Kaur proved to be a total success and a great poet. Here are 16 beautiful Rupi Kaur quotes to help you become kinder and love yourself more. I want to apologize to all the women I have called beautiful before I’ve called them intelligent or brave.

Loneliness is a sign you are in desperate need of yourself.

I didn’t leave because I stopped loving you, I left because the longer I stayed the less I loved myself.

Do not look for healing at the feet of those who broke you.

What is stronger than the human heart which shatters over and over and still lives?

People go but how they left always stays.

The world gives you so much pain and here you are making gold out of it — there is nothing purer than that.

That is the thing about selfish people. They gamble entire beings, entire souls to please their own.

People say things meant to rip you in half, but you hold the power to not turn their words into a knife and cut yourself.

A lot of times we are angry at other people for not doing what we should have done for ourselves.

Love does not look like a person, love is our actions, love is giving all we can. It takes grace to remain kind in cruel situations.

I was music but you had your ears cut off.

You must want to spend the rest of your life with yourself first.

I am sending my love to your eyes. May they always see goodness in people. And may you always practice kindness.