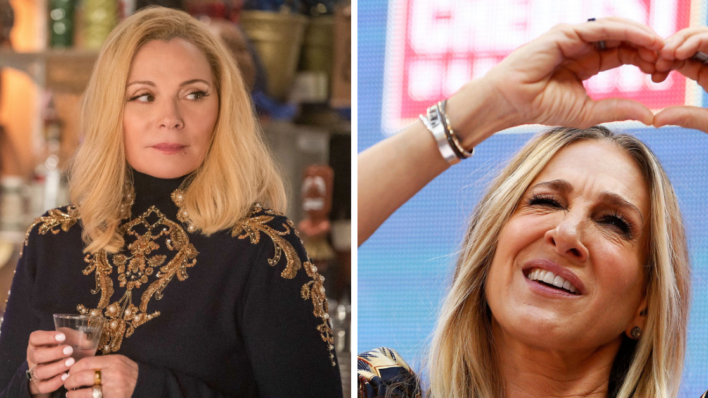 Recently, the news dropped that cult-favorite television series Sex And The City would be making a comeback with much of
By Aly Walansky    January 12, 2021

Recently, the news dropped that cult-favorite television series Sex And The City would be making a comeback with much of

Recently, the news dropped that cult-favorite television series Sex And The City would be making a comeback with much of the original cast intact — but minus the character of Samantha.

Fans were torn on the news. While many believe it’s a reflection of the real-life conflict between Kim Cattrall, who played Samantha, and Sarah Jessica Parker, who played series lead Carrie, some were very concerned the show wouldn’t work if the foursome was suddenly made up of three friends instead of four.

But realistically, how many of us maintain the same unchanged core group of friends throughout our entire adult lives? Generally, are those we are spending time with in our twenties or thirties the same people we spend our time with in our forties and fifties?

“I think there’s a romanticized idea in our culture that friendships are forever, when in fact, relationships change for many reasons and not all of them are negative,” said Meg Gitlin, LCSW.

There’s a lot of reasons friendships can end, or even change. There’s, of course, fights and friendship breakups. But often it’s something a lot more subtle or passive.

We may move to different cities, have different interests, or our lives and priorities are just not the same anymore.

“Perhaps your best friend from childhood is saddled with three kids and no childcare, and you are free as a bird to pick up at any moment,” said Gitlin. This is not necessarily a bad thing, it’s the reality that people take different trajectories in life.

These shifts sometimes happen in a way that you aren’t even aware of until they’ve already happened. Maybe you go from a daily FaceTime and weekly coffee chat to a monthly drink and things dwindle from there.

“I think there’s value in normalizing these shifts, because it helps us feel less crappy about ourselves when they happen,” said Gitlin.

The definition of a healthy friendship, according to Gitlin, is not one that reflects rigidity, but instead one that can change and grow with the two individuals, even if that means growing farther and not closer apart.

“In my job as a therapist, I can’t tell you how often I work with people to process changes or the end of relationships,” said Gitlin. It’s heavy and sometimes painful, but just as often can be a relief.

“People feel liberated when they are more active in deciding who they want to spend their time with and what kind of energy they want in their lives,” said Gitlin.

This has never been more true. People who felt stuck in relationships for years realize that they can make the decision to leave and suddenly have more time and energy to devote elsewhere.

Friendships and relationships can naturally fade over time, even if there was no argument or falling out.

“Whenever this happens in my own life and I am upset about a friendship coming to an end, I refer to a poem written by an anonymous poet. It’s titled ‘A Reason, A Season, Or A Lifetime,’ “ said psychotherapist Jennifer Tomko, LCSW, owner of Clarity Health Solutions in Jupiter, Florida.

The poem explains that some people enter our lives for a specific purpose, others for a period of time, and others remain forever.

“There are those three categories and it is psychologically harmful for you to try to force a friendship to last beyond its expiration date,” said Tomko.

Should you maintain a friendship?

Relationships, both platonic and romantic, should bring you joy the majority of the time. “If a given relationship is bringing you more stress, sadness, or hardship than it is happiness, move on,” said Tomko. Do yourself that favor.

So many people are experiencing this right now. Experiencing COVID-19 lockdown in different ways than our friends can make us no longer want to be friends with that person when we’re free to be social in traditional ways again.

After quarantine has concluded, some people may elect to put an end to their communication with certain people for a variety of reasons.

“The precautions people are or are not taking during COVID-19 has created a spectrum of polarizing opinions,” said Tomko.

Some people like to surround themselves with only like-minded people, while others like to be part of a diverse group.

If you are the kind of person who likes to be surrounded by people who only think and feel like you and coronavirus has exposed people in your life who think differently, says Tomko, you might choose to put that relationship in the past.

The pandemic’s effect on friends

People feel very strongly on both sides of the vaccination argument. People who believe in vaccines may not want to be in the presence of people they know have not been vaccinated.

The pandemic has created an atmosphere where people are really showing their true colors. “If someone isn’t checking in on you to make sure you are mentally, physically, and financially healthy, you may find them to be rude, thoughtless, and inconsiderate and elect to abandon the friendship,” said Tomko.

You may feel there wasn’t a true friendship to begin with if they aren’t expressing concern. Or maybe the friendship was one-sided and not reciprocal.

Friends are not always forever

People believe friendships are supposed to be forever. Some are. But it’s OK if others are not.

“I think one of the reasons that people don’t typically associate friendship with something that is conditional goes back to school yard lessons that teach kids that friendship is through thick and thin,” said Gitlin.

While this is sometimes true, there’s power in accepting that something just isn’t working any more. In fact, it means we are changing and growing, which is a good thing.

The fact that friendships are pluralistic, says Gitlin, unlike (most) romantic relationships means that people let bad relationships hang around for longer, because they aren’t necessarily blocking other relationships the way a romantic one would.

“Once you accept that all relationships (friendships and otherwise) can change, you start paying attention to the ones that add to your life, and which ones detract,” said Gitlin.

You have more control over your time, happiness and resources and it’s actually a pretty healthy thing, as opposed to  a negative one which it is sometimes portrayed as.

So, yes, Sex And The City may look a bit different without Samantha come the revival – but that’s OK. It may just reflect a normal trajectory in friendship and how it changes with time and age and circumstance. Perhaps it’ll allow us all to look inward at our own friendships and accept those changes in our own lives as well.