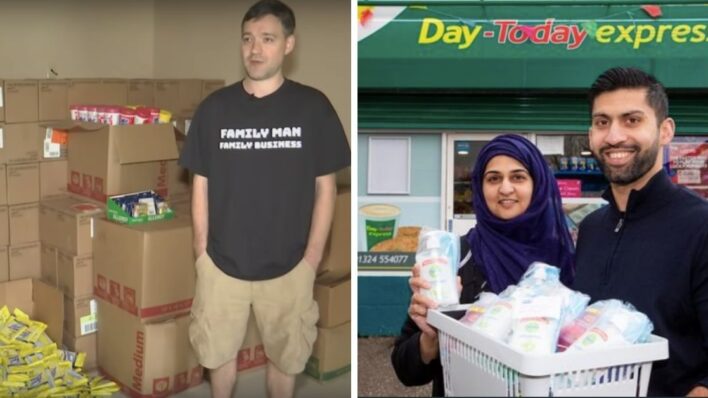 Scottish couple Asiyah and Jawad Javed have demonstrated incredible compassion by stocking up on hand sanitizers with the intention to provide free packages to the most vulnerable members of their community.
By Shaoni Das    March 18, 2020

Scottish couple Asiyah and Jawad Javed have demonstrated incredible compassion by stocking up on hand sanitizers with the intention to provide free packages to the most vulnerable members of their community.

If you have been tuning in to the news lately, you may have noticed that we are all currently living in the midst of a pandemic. The COVID-19 virus has spread across the entire world, and it is accompanied by widespread panic and fear. Some of it is understandable; after all, the virus has taken almost 8000 lives at the time of writing this article. And the number is growing exponentially every hour.

But the chaos surrounding the virus has led many individuals to fear a so-called apocalypse. People have been flooding their local grocery stores to grab what they can to hunker down for a while. They’ve been stockpiling toilet paper, hand sanitizers, and even entire meat sections. But what they’re forgetting is that panic buying can have a self-fulfilling effect.

Think about it: if you see on the news that people are emptying out your local stores, then you’re more likely to do so yourself in case the store sells out. This system may very well be workable for those who have the time and energy to secure their essential items in bulk, but it leaves our most vulnerable populations struggling for scraps.

The elderly population, in particular, are getting hit hard by the virus; they’ve been told by their governments to reduce traveling, stay put inside their homes, and minimize social contact. How are they possibly expected to have sufficient food and basic necessities when their local grocery stores are basically empty by the time they get in?

This Scottish couple are going the extra mile

At a time when stores are already overwhelmed by local residents going in and out to grab bulk supplies, we don’t usually expect most store owners or employees to spare a moment for the elderly populations. But this Scottish Muslim couple based out of Stenhousemuir, Scotland, is literally saving their community through their kindness.

Jawad and Asiyah Javed are the owners of a convenience store in the area called The Day Today Express. Being a source of basic items, their services are already in high demand. But during this crucial time, they have also decided to deliver free care packages for elderly populations in the region. These care packages are absolutely free and contain essential items to protect oneself against the virus, such as hand wash, hand sanitizer, and face masks.

The seniors can make a call to the store and they will have their COVID-19 packages delivered straight to their doorstep. On top of these much-needed care packages, the couple is also offering free delivery of groceries and food to elderly or unwell individuals. So the most vulnerable members of their community don’t have to worry about stepping a foot outside and dealing with the raucous crowds at the supermarket. All thanks to a couple who have decided to open up their hearts and their arms (figuratively) to protect their community.

Speaking to The National, Mrs. Javed said that she had encountered an elderly woman outside a supermarket who was really upset at not being able to get handwash. That’s when she realized that the elderly are at a massive disadvantage when it comes to shopping in their local grocery stores; they’re “suffering”.

We are just trying to help elderly people. If we help them, that’s the best we could do in our lives.

Asiyah Javed To The National

Individuals from all over the Falkirk area are flooding the shop’s phone line to access their services. They’ve even had calls from locations at least an hour’s drive away from their store. But Mrs. Javed maintains her usual response, “We can come wherever you want.”

They are also asking local children to grab sanitizer wipes before heading off to school in the morning. This shows that they are not just concerned for the elderly populations; their range of care extends to everyone in the community, from the young to the unwell to the seniors.

The store’s Facebook page is updated daily with new posts advertising their services. They’re also urging other local stores to follow in their footsteps to deliver toilet paper rolls and paracetamol.  At the time, they’re not worried about running out of stock; they want to keep doing this as long as they have new stock coming in.

Their compassion is thriving during the worst of times

Compare the Scottish couple to this Tennessee man who bought 17,700 bottles of hand sanitizer in order to sell them on Amazon at marked-up rates. It’s not unusual to see people take advantage of a desperate situation to practice price-gouging or exploitative measures.

The man eventually ended up donating his stock of hand sanitizers after coming under investigation for price gouging but that’s a lesson learnt anyway. He tried to turn a profit during such a dreadful time, and it backfired on him.

In fact, even Asiyah and Jawad have been told to capitalize on this pandemic.

Other shoppers are calling us stupid, and saying ‘why are you giving them away for free?’

Asiyah Javed to The Daily Record

Unlike the man from Tennessee, Asiyah stocked up with this exact purpose in mind.

But money is not everything, there will be the opportunity to make money in future. I started stockpiling hand gel when I heard about Coronavirus, from the cash and carry. People thought I was going to sell them, but I had this in my mind.

Asiyah Javed to The Daily Record

During what is being described as a severe public health crisis, Asiyah and Jawad Javed, have become strongholds of the community in ways more than one. They’re not only offering physical services that actively help our most vulnerable members amidst the chaos but they are also extending gestures of goodwill and compassion that go a long way to offer hope to the rest of us. If a community can overcome its differences and come together to help each other, then it’s possible for the rest of us to follow suit.

Humanity has never been this vital

We find ourselves living in a very unique situation at the moment. It’s not every day, or every year or every decade for that matter, that the entire world is focused on one singular matter all the way through. To witness these far-reaching devastations as a result of the virus can make anyone feel scared or frustrated or just plain sad, but it’s in times like this that our true humanity awakens and flourishes.

It doesn’t matter whether it’s in the level of national lawmakers extending help to countries that are torn by the disease or just your next-door neighbors doing far more than what’s required of them — we can only move forward and overcome this obstacle if we work together, practice empathy and generosity, and lift each other up.