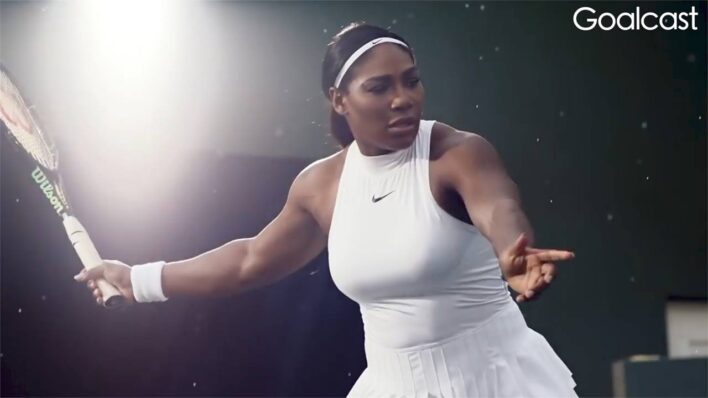 Serena Williams – Rise Serena Williams discusses the adversities she had to overcome, and shares a poem from her favorite poet,
By Goalcast    May 1, 2017

Serena Williams discusses the adversities she had to overcome, and shares a poem from her favorite poet, Maya Angelou, that inspired her to rise above.

“I’ve had my shares of ups and downs. I’ve had many struggles. I’ve had blood clots in both my lungs at the same time. I lived through tragedies and controversies. People look down on me, put me down because I didn’t look like them. I look stronger. I’ve had people look past me because of the color of my skin. I’ve had people overlook me because I was a woman. I had critics say I will never win another Grand Slam when I was only at number seven. Now, here I stand today with 21 Grand Slam titles and I’m still going.

“I cannot help but think of my favorite poet, Maya Angelou. She has this poem called And Still I Rise, so here it goes: ‘You may write me down in history with your bitter, twisted lies. You may trod me with the very dirt but still, like dust, I rise. Just like moon and suns with the certainty of tides, just like hopes and springing high, still I rise. Did you want to see me broken? Bowed head and lowered eyes? Shoulders falling like teardrops weakened by my soulful cries? Out of the huts of history’s shame, I rise. From a past that’s rooted in pain, I rise. Into the daybreak that’s wonderfully clear, I rise. Bringing the gifts that my ancestors gave, I rise. I am the dream and the hope of a slave. I rise. I rise. I rise.’

“Thank you so much for giving me a chance to rise. I’m so honored.”