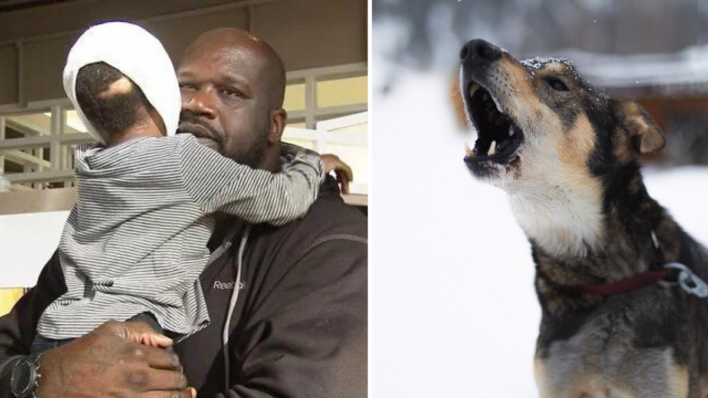 When a sweet girl’s innocent life was viciously ripped apart, in swooped a larger-than-life superhero to save the day.
By Bryan Liquor    August 29, 2022

When a sweet girl’s innocent life was viciously ripped apart, in swooped a larger-than-life superhero to save the day.

It’s a memory that no little girl should carry. 5-year-old Syrai Sanders was walking to the school bus stop with classmate and next door neighbor Logan Braatz, when they were viciously attacked by two large dogs.

Sanders spent weeks in the hospital and barely pulled through after undergoing 8 surgeries in 2 months. Sadly, Logan didn’t make it.

Braatz’s uncle Andie Brasley, who described Logan as his very own ‘mini-me’, told AJC that he was outraged.

When asked about her friend, a gloomy Sanders said, “I miss Logan, playing with him, talking to him.”

While she couldn’t get her friend back, she would get a surprise invite from a gentle giant who would help her smile again.

That giant was none other than basketball legend Shaquille O’Neal. Seeing Syrai’s awful story on the news gave him the motivation to act. And so, he invited the Sanders family out to ‘Go Rooms Go’ furniture store in northwest Atlanta. There, he would buy them brand new furniture to help them turn to a brand new page. He also bought Syrai a new laptop.

Footage caught Sanders and the giant kid O’Neal playing hide-and-seek throughout the store, with O’Neal hiding. You can bet that Syrai had an edge in that game.

Syrai’s father, Willie Sanders, said that O’Neal has been in touch with the family since the attack and continues to check up on her. He also added that it’s not about fanfare for the big guy.

Sanders still has a long road to recovery, which can include more surgeries.

Yet, her mother Jeresha Williams told FOX that within a week of leaving the hospital, Syrai has not only been dancing and smiling, but has also put on a brave face.

RELATED: Shaq Overhears Man Struggling To Purchase Engagement Ring, Steps In And Pays For It

“Today was her first time seeing herself and I didn’t know how she was going to handle it, but she was looking as though she was looking at how she was, how she had been throughout her life and I asked her ‘Did you see how beautiful you are?’ and she said ‘Yes,’” said Williams.

Now that’s the resilience of a champion. Meanwhile, Sanders said that her motivation is getting back to school and playing the piano.

The dog’s owner, Cameron Tucker, was arrested for reckless endangerment. Let’s hope it serves as a reminder for dog owners to keep their dogs leashed or locked to avoid another nightmare.

On the brighter side, it’s nice to see a girl’s spirit triumph over tragedy. And when you have a real-life superman in your corner whose heart is bigger than his build, there’s not one scar that stands a chance.

You don’t need an ‘S’ on your chest to be a hero, you just have your heart in the right place.