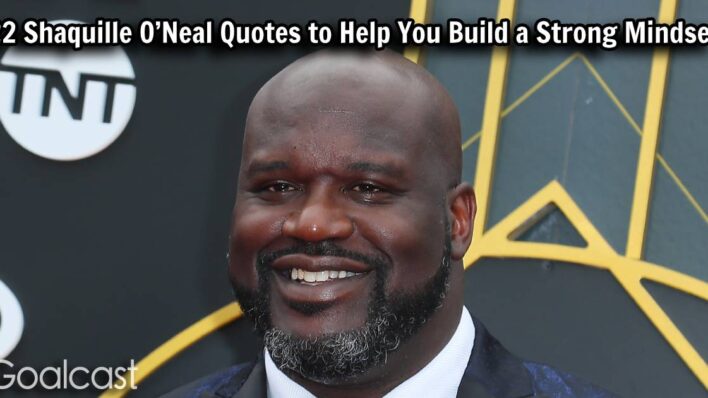 Even if Shaquille O’Neal is already considered a legend, the man doesn’t seem to want to just rest on his laurels. Here are 22 Shaquille O’Neal quotes to help you build a strong mindset
By Flavia Medrut    March 30, 2020

Shaquille O’Neal is one of the greatest players in NBA history. During his long career, he helped his teams win championships and Olympic gold.

Before officially retiring in 2011, the 7-feet legend earned many individual accolades and was named NBA’s MVP twice in back-to-back seasons.

Some of us would need more than one life to accomplish everything that Shaq has by now. He has so much talent, drive and business acumen that he managed to achieve every goal he set for himself.

He was the best on the court, but his professional evolution after retiring is even more impressive. Shaquille became an NBA analyst for Turner Network Television and reinvented himself as a musician and as an actor.

He also devoted a great deal of time in taking care of his education and earned a doctorate degree. But wait, there’s more! The former NBA star is now a Florida sheriff’s deputy and plans to run for sheriff in 2020.

Shaq’s life is definitely inspiring and motivating as the man doesn’t seem to want to rest on his laurels even if he continues to earn millions from endorsements.

Here are 22 Shaquille O’Neal quotes to help you build a strong mindset:

The day I stopped worrying about stats is the day I started winning.

The only person who can really motivate you is you.

I did everything the right way and earned my spot in this game, nothing was given to me.

I don’t believe that I personally have been changed by the money. The bad thing is people assume you’ve changed because now you have money.

I had to learn at an early age to turn criticism into motivation.

I don’t know how it is for you earthlings, but where I’m from, strength is mental.

From this day on I’d like to be known as ‘The Big Aristotle’ because Aristotle once said, ‘Excellence is not a singular act; it’s a habit. You are what you repeatedly do.’

We’re focusing on the whole pie, not a slice. A slice is good, but it’s not good enough to get you fat. We’re trying to get fat.

Everything happens for a reason. I’m used to it, I prepare for it. Like I say, at the end of the day, those in charge of their own destiny are going to do what’s rights for them and their family.

Me shooting 40 percent from the foul line is just God’s way to say nobody’s perfect.

I start off at one price.  Every now and then I’ll go down, but eventually I’ll go back up.

When your general doesn’t panic, the troops don’t panic.

I don’t get nervous in any situation. There’s no such thing as nerves when you’re playing games.

I think I have done enough to remain successful, but I don’t think I’ve made it yet… I’m just a regular guy that just listened to the right people.

Look up the word role in the dictionary and you’ll see it means playing a part. That’s why I call myself a real model.

We know that we’re supposed to win all the games, but if we don’t, we just have to take the next game and focus on what we did wrong in the game before and just try to do better at the next game.

I was taught and raised to never give up, always persevere and no excuses.

I guess people think the taller you are the more dominant you have to be.