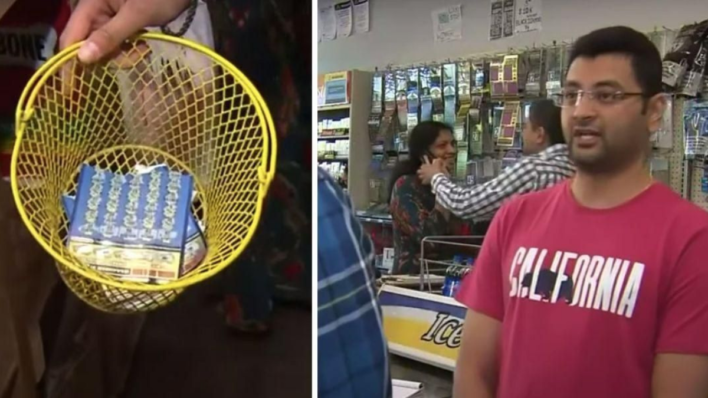 When given the opportunity to take home $1 million, shop owners at a Massachusetts convenience store decided to do the
By Joel Balsam    June 3, 2021

When given the opportunity to take home $1 million, shop owners at a Massachusetts convenience store decided to do the kind thing.

She tossed away $1 million

Lea Rose Fiega is a regular at the Lucky Stop convenience store in Southwick, Massachusetts. In March, she bought lottery tickets including a $30 Diamond Millions scratch-off ticket.

“I was in a hurry, on lunch break, and just scratched it real quick, and looked at it, and it didn’t look like a winner, so I handed it over to them to throw away,” she told The Associated Press.

The ticket sat behind the counter for 10 days until Abhi Shah, the son of the store’s owners picked it up.

“One evening, I was going through the tickets from the trash and found out that she didn’t scratch the number,” Abhi Shah, the son of the store’s owners told WWLP-TV. “I scratched the number and it was $1 million underneath the ticket.”

A remarkable act of kindness

Shah had a dilemma on his hands: keep the ticket and become a millionaire. Or, give the money back to Fiega, who he remembered buying the ticket.

For Shah, the decision was clear.

“He came to my office and said ‘my mom and dad would like to see you,'” Fiega told AP. “I said ‘I’m working,’ and he said ‘no you have to come over.’ So I went over there and that’s when they told me.

“I was in total disbelief. I cried, I hugged them.”

She won the lottery twice

Fiega said she’d already felt like she’d won the lottery in January, having survived COVID-19. But this good deed made her all the more grateful.

“I mean, who does that? They’re great people. I am beyond blessed,” she said.

Fiega shared some of the money with the Shah family and is saving the rest for retirement. The Shah family will also receive $10,000 for selling the winning ticket.

What would you have done if you’d found that $1 million ticket? I’d have to presume that many of us would have taken the cash and walked — but that’s what makes the Shah family’s actions so special. They did the respectable and kind thing, and while they didn’t get $1 million, they got to share the winnings. Thanks to them for helping restore our faith in humanity today.