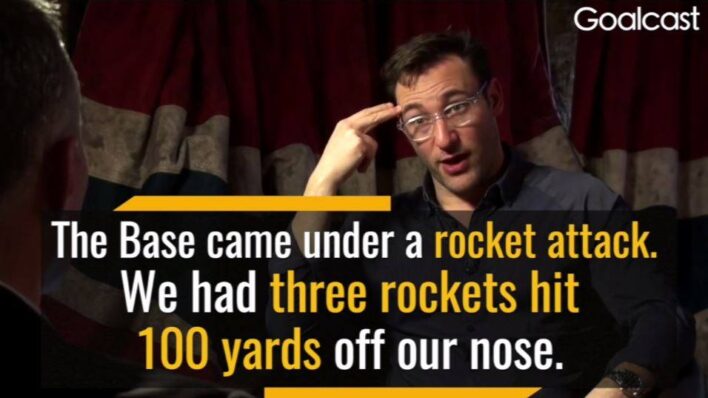 Simon Sinek – Devote Yourself Simon Sinek tells his story about his trip to Afghanistan and how a near
By Goalcast    September 7, 2017

Simon Sinek tells his story about his trip to Afghanistan and how a near death experience made him realize the true value in devoting yourself to others.

The base came under a rocket attack. We had three rockets hit 100 yards off our nose. And everything on my trip went wrong, so I’m now stuck in Afghanistan for at least four days and no way to reach my family and say that I’m going to be out of, I’m going to arrive home four days after I told them I was going to get home. They just won’t hear from me. It’s not like I can call them and be like, hey I’m going to be late. I’m in Afghanistan, you know.

And I remember every fiber of my being sinking. I just remember just all the energies leaving my body. I remember the feeling distinctly. I remember where I was standing, the whole picture is clear. And I remember I became preoccupied with one thing and one thing only, my happiness, my success, not my success, my safety and my comfort. That’s all I cared about. And I remember there was a public affairs officer who said, “I can get you on a plan to Kyrgyzstan but you don’t have the right visa.” To which I said, “You get me on that plane.” Like, I don’t talk to people that way. And I could see myself becoming this person that I don’t know.

Right. And I realized even back then, even at the time, that I was becoming that boss that we’ve all had that only cares about their success, their promotions, they’re advancement and doesn’t care who has to twist themselves in knots to get them what they want. That was me. I didn’t care who had to go out of their way, or twist themselves in knots to get me what I wanted. My safety, my comfort, my happiness. And here I am stuck, in this 24 hour compressed period. And I remember the paranoia. I was convinced, I mean convinced, that there was going to be another rocket attack. And I was convinced it was going to land on me. I was convinced that my parents would find out that I was in a war zone, when an Air Force officer went and knocked on my parent’s door. I was convinced of it.

And so I’m trying to solve my problem, I’m lying in bed trying to figure it out, make this horrible feeling go away. I’m in the purpose business, so I know that when you have a sense of purpose it gives you this calm and I didn’t have a purpose, I was just there as an observer. So I tried to invent one. I’m like “you’re here to tell their story and come back and share what you learned.” And it made me feel good for like a minute, five minutes. And this happens in companies as well. They try and articulate some nonsense vision or mission or purpose or why, whatever they want to call it. And it doesn’t work. It lasts for a couple weeks. Doesn’t really inspire. It’s inspiring in the meeting and that’s it.

So I decided I would volunteer. I decided that I would offer to speak whenever and wherever they wanted me to. I decided that, I’d met some amazing people, that I would volunteer to help them. I would sweep floors, I would carry boxes, I didn’t care how menial the labor was, as long as I could be of use. As long as I could serve those who were serving others. Upon making that decision, this overwhelming calm came over me. The fear went away. The paranoia was gone instantly, I even had a sense of excitement. I was actually excited to serve those who served others.

I felt amazing. And this is what I learned. I learned that a true sense of purpose doesn’t come from what we can do to get. It comes from what we can do for others. That true sense of purpose is the opportunity to serve those who serve others and the calm and confidence and courage that it takes to live a life or build a business, comes when we devote ourselves not to our own success, but to the success of others.