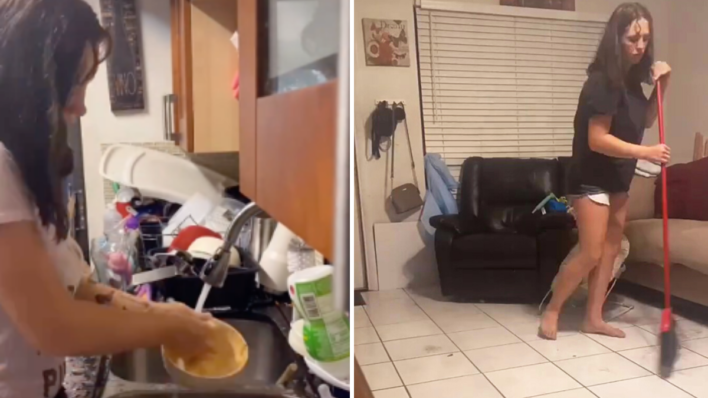 One TikTok user disproves all stay-at-home mom stereotypes in a minute-and-a-half.
By Amber Dowling    July 16, 2022

One TikTok user disproves all stay-at-home mom stereotypes in a minute-and-a-half.

Being a mom and raising a family is hard work. Whether you’re a stay-at-home mom or a working mom, all moms just want to feel seen and appreciated. Unfortunately, that isn’t always the case. And one tired stay-at-home mom decided to do something about it.

Why A Stay-At-Home Mother Of Two Felt Underappreciated

A TikTok user named Sierra Nicole was tired of not feeling appreciated by her partner for all of the things she did around the house while he was off at work. Sure, she wasn’t necessarily bringing home a paycheck, but she was doing a ton of work at home that was going unnoticed and unpaid. So one day when her partner accused her of not doing anything she decided to make a video.

The video, which was posted to the social media platform in May, is just over a minute long and features Sierra doing her evening routine with her two kids. “My boyfriend says I don’t do anything at all while he works all day, so I thought I’d take a video of all the things that I do,” she explains.

In the video, Sierra starts off by washing a ton of dishes before attempting to make her daughter a dinner that she will eat. When that battle is done, she cleans the kitchen and changes her son’s diaper. Then she bathes her daughter and washes her hair (another battle) and gets her dressed in specific pyjamas. “She’s super picky about what she wears and she has to have socks,” the mom explains.

You would think bedtime would be next, but nope. Sierra then incorporates a bit of TV time while she situates her son, folds laundry, and begins tidying up the dining room. Then it is time to put her daughter to bed, which is another mini battle this mamma overcomes while staying calm and supportive.

Then she turns her attention back to her son and hangs out with him while trying to finish cleaning up the dining room and living room. At that point, she’s hungry so she eats her dinner standing up at the counter with one hand while holding her son in the other.

Of course, her son has an accident on her, so she changes them both and then finishes eating. Then she bathes him, gives him a bottle, and finally gets him to sleep. Think it’s finally time for the mom to relax? Not yet. She finishes the cleaning and sweeps and mops the floor. Exhausting, right?

Normally after I was done with that I would be texting him to ask what he wants for dinner but tonight I’m just going to pour myself a drink and say a big f— you to all the guys who don’t appreciate their women.

How One Woman Broke All Stereotypes About Stay-At-Home Moms

I just want to feel appreciated… 😞 so many things I didn’t even record. Tik tok I am 22 stop taking this down for drinking .

♬ Get You The Moon – Kina

Sierra’s story isn’t unique — moms everywhere feel undervalued for the work they do at home, for carrying the mental load, and for so often being the default parent. There’s a reason for the saying “it takes a village;” being a mom is hard on multiple levels.

But it doesn’t have to be lonely. Recognizing, valuing, and helping out moms — whether they stay at home to provide full-time care or are balancing work while raising their families — is important. Their physical, emotional, and mental well-being requires it.

RELATED: Woman Gets Shamed For Breastfeeding Son In Public, Thousands Of People Stand Up For Her

It could be something as kind and simple as offering to watch the kids for a few hours so she can get some things done in peace, swinging by with a hot coffee, sending her a hot meal, or even just checking in to see how she’s doing. Just by taking the time to show a mom that you see her and the awesome job she’s doing, you’ll make her feel a lot more appreciated for who she is and what she does.

appreciate people
“If the only prayer you ever say in your entire life is thank you, it will be enough.” – Meister Eckhart
Tags
Share
← Prev Post Next Post →