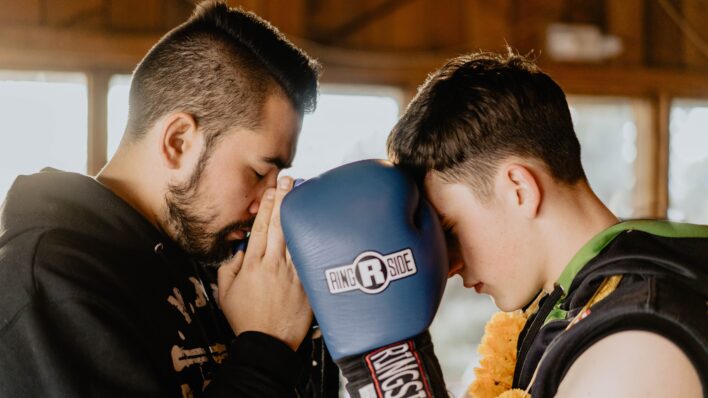 Like so many of us, Stephen Hecht grew up in a world where conflict was a normal part of his
By Goalcast    June 3, 2019

Like so many of us, Stephen Hecht grew up in a world where conflict was a normal part of his life. His family life was riddled with business conflicts from a young age — a result of power imbalances caused by a shared formal wear business.

Hecht was taken under the wing of his Uncle Jack, who was the president of the family business and, without an heir of his own, raised Hecht to be his successor. When his uncle passed, Hecht discovered that Jack had willed Hecht the ability to buy controlling interest in the family business — ahead of his other uncles, cousins, and even his own father.

The resulting conflict had a long-lasting impact on Hecht’s emotional state: “In order to deal with that– emotionally I kind of shut myself down. I became very stoic, where I wasn’t in touch with my own feelings because I didn’t know how to deal with it — be it grief, be it anger, be it happiness, wherever.”

As he set himself to learning to run a business, this emotional shutdown continued. Hecht married for the first time and had a daughter and three sons, but after 9 years: “we got divorced and she took the kids to California.”

After finally selling the family business, Hecht remarried again, but found himself getting divorced 9 years later, yet again.

In search of a family dynamic and meaning beyond his success in the business world, Hecht found a support group in the Young Presidents’ Organization, a group of executive who strive to become “better leaders through life-long learning and idea-exchange.”

Having seen the destructive impact conflict had on his life and the lives’ of others, Hecht was driven to create a program that would make an impact in different parts of the world, and that could scale from the highest levels — religious and political conflicts — to the most personal levels — interpersonal conflicts.

From this came the “Nonflict Method” — a way of ensuring that conflict is productive rather than destructive. Instead of approaching conflict like a battle — with a winner and a loser, the Nonflict Method helps you and your partner find a common goal to work toward together.

“Looking around the room, there were tears in people’s eyes. At that moment, we had love in the room. We went from not knowing our neighbor to love in four hours.”

Wanting a strategy that could unite nations in conflict, opposing religions, and resolving relationship issues alike, Hecht teamed up with organizational psychologist Dr. Amir Kfir to create a conflict resolution model “that was so simple we could fit on the back of a business card after we learned it.”

Together, Hecht and Kfir founded One Million Peacemakers — “a million people co-creating a culture of peace in the world.” The organization trains coaches to resolve conflict with the Nonflict Method on three levels: families, youth, and businesses.

They also co-authored Nonflict: The Art of Everyday Peacemaking, and Hecht now travels the world, bringing the Nonflict method to international and religious leaders. Hecht is also celebrating his 10th wedding anniversary with his third wife.

From training soldiers in African countries to build bridges with their neighbors, to healing the wounds of suicide within a First Nations community, to resolving a bitter argument between a mother and her teenage daughter, the Nonflict Method’s three simple steps can be applied to any level of conflict in your life.

1. Understand yourself and your partner

Each person involved in the conflicts must themselves the questions: “What is the conflict? How does it make me feel? What is important for me?”

Self-awareness, honesty, and vulnerability are vital to this first step. Think carefully about what in your past and upbringing has influenced the way you act and think. Only once you understand your own perspective can you share it constructively with your partner.

The way that you present your perspective to your partner is equally important. Constructive communication must be non-judgmental, focusing on your own opinions and feelings without assuming your partner’s side of things.

Now it’s time to ask: “What is our real underlying conflict? What is working well for us? What is our worst-case scenario?”

To get to the root of the conflict between you and your partner, you need to separate symptoms from causes. If you go to the doctor with stomach pain (the symptom) caused by an infection (the causes) and simply get a prescription for a painkiller that doesn’t address the underlying illness, you’ll only grow sicker. The same applies to conflicts in your life.

In most conflicts, we are only thinking about the current negative outcomes, or end results that will benefit one person while hurting the other. Acknowledging that there is something good that can be improved upon rather than just a problem to be solved will change the way you think about conflict.

On the other hand, confessing your most feared outcome to your partner is an act of trust. Sharing your fears can be therapeutic and will also humanize you to your partner. You may even find you have a shared “worst-case scenario” that will motivate you to resolve your conflict.

Now, it is time to ask: “What is our best case scenario? What are the obstacles to achieving it? What can we do to overcome controllable obstacles?”

It’s not enough to identify your conflict or to empathize with your partner — you have to act on the realizations you’ve come to.

By articulating the best outcome for you both, you’ll have a concrete goal to work toward, but identifying what is blocking you from reaching that outcome will keep you and your partner from getting carried away with imagining.

With your goal and obstacles identified, it’s time for you and your partner to make an actionable plan and work together toward