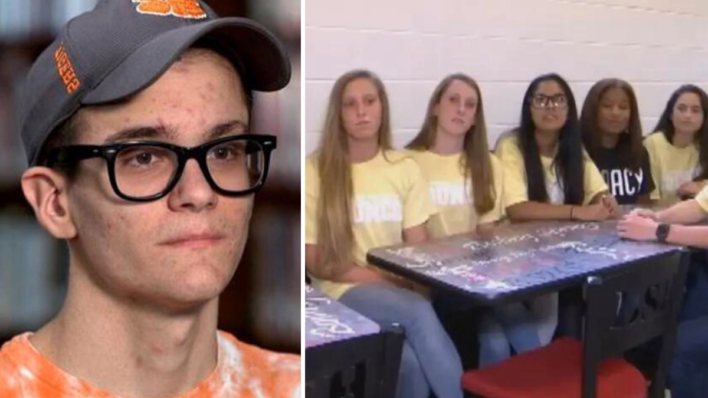 The first day of school changed everything for one solitary teenager.
By Sophie Babinski    August 30, 2022

The first day of school changed everything for one solitary teenager.

One young man’s mother publicly thanked her son’s classmates when he came home from his first day of school with a huge smile on his face and an announcement — a few kids had invited him to eat lunch with them!

Why a Mother of a 16-Year-Old Boy Was Worried

16-year-old Andrew Kirby, who was adopted from the foster care system as a baby, has faced many difficulties in his short life. He was born addicted to drugs because of a mother who used during pregnancy; Andrew also suffers from neurofibromatosis, a genetic condition that causes tumors to form in the brain, spinal cord and nerves. This condition has caused Andrew to have many major surgeries. Despite his physical hardships, he has always had a good attitude.

At school, Andrew has always been a loner. He never had much of a social life and always ate lunch alone. His worried mother would text Andrew and ask him if he had found somebody to eat with.

He always answered that he was eating alone but encouraged his mother not to worry, telling her, “Mom, it’s ok. I get on my phone, so I don’t notice.” Andrew’s mother, Kay Kirby, was heartbroken imagining her son eating alone, surrounded by groups of his peers laughing and socializing.

“He’s more of a loner. He’s a good kid, but he’s just different. It doesn’t make him odd or bad. He’s very loyal and everybody that meets him, loves him,” Kay said.

How High School Students Proved the Importance of Including Others

On the first day of school, Kay picked up Andrew as usual. This year, the pickup was different. Andrew excitedly told his mother that the student council kids had invited him and a few other students, who also eat alone, to sit with them. Since then, Andrew’s social life has picked up. He’s been sitting with the same group every day at lunch, and even attended a movie night with them. The new social connections have drastically lifted his mood, much to his parent’s excitement.

“We’re just blown away. High school is hard. We’ve all been there. They didn’t care about what their peers thought and they still invited these [kids] to sit with them at lunch. I applaud them for doing that,” Andrew’s dad, Tyler Kirby said.

RELATED: A Lonely Boy’s Friends Ditch His Birthday Party – But a Surprise Rescue Saves the Day

Kay Kirby wrote a public message of gratitude to the kids who went out of their way to encourage Andrew, and the post has been shared more than 14,000 times. It even reached United States Senator Tim Scott, who thanked the kids for their kindness and empathy in a video he published.

We can all relate to feeling lonely and having a hard time making friends at school. We were all like Andrew once, and we should all strive to be generous and kind like the kids who invited Andrew to join them.

INCLUDE others
“Until he extends his circle of compassion to include all living things, man will not himself find peace.” – Albert Schweitzer
Tags
Share
← Prev Post Next Post →