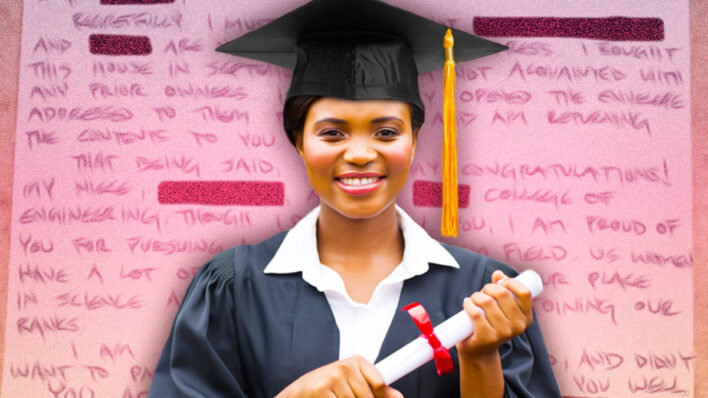 One stranger supported a recent graduate after accidentally receiving an invitation to a graduation ceremony in the mail.
By Lindsey Staub    April 16, 2022

One stranger supported a recent graduate after accidentally receiving an invitation to a graduation ceremony in the mail.

Last year, as students all around purchased caps and gowns, finished finals, and took senior portraits, one student prepared to graduate by inviting her family to her graduation ceremony.

The Arrival of a Mysterious Card Containing an Encouraging Message

Only after she received one of her invitations back in the mail did she realize she had sent an envelope to the wrong address. Instead of merely receiving her own letter with a “Return to Sender” stamp, the student found a kind message included.

The card told the student that the previous tenants of the address had moved and the current owners are not in touch with them. But it did not stop there. The woman continued to offer her own congratulations, and even included in the card $20.

“Accidentally sent a grad invite to my extended family’s old address. Received this touching letter (and $20!) in return!” she wrote.

The stranger’s letter further complimented the student on her academic pursuits and offered her some words of encouragement.

Though I don’t know you, I am proud of you for pursuing a career in a STEM field. Us women have a lot of work to do to take our place in science and I am happy you are joining our ranks.

How One Stranger Provided Unexpected Moral Support to a Student

The woman, who confessed she opened up the envelope by mistake, even included some information about herself, so as to make the message more personal.

“I am a 35 year old mom of two, and didn’t want to pass up the opportunity to wish you well. You are going to do great!” she said at the end.

“Brought a smile to my face. What a wonderful and kind gesture from a stranger,” commented one user.

One woman kindly supported a stranger, even though she found out about this accomplishment by accident, showing us that we do not need to know each other personally to be proud of one another’s achievements. The more support we spread, the more we can each accomplish.

lift others up
“Encourage, lift, and strengthen one another. For the positive energy spread to one will be felt by us all. For we are connected, one and all.” ― Deborah Day
Tags
Share
← Prev Post Next Post →