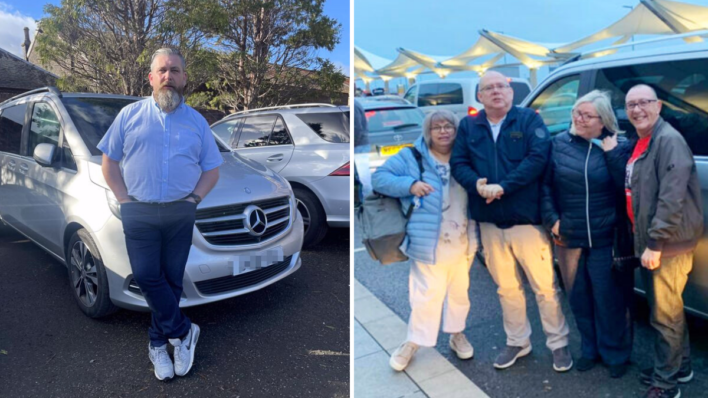 One taxi driver was only supposed to be taking passengers to the airport for their flight, but when he found out the flight was cancelled, he turned into a hero.
By Sophie Tolias    May 5, 2022

One taxi driver was only supposed to be taking passengers to the airport for their flight, but when he found out the flight was cancelled, he turned into a hero.

John Murphy, owner of Elite Central Travel, was only supposed to be taking his passengers from Falkirk to Glasgow Airport so they could take their flight to Heathrow airport in London, before travelling to the Caribbean.

However, when British Airways cancelled the Glasgow flight because of stormy weather and no other options were available to them, Murphy drove them 405 miles to the capital… for free.

Why a Glasgow Taxi Driver Drove Cross-country for His Passengers

“I was bringing customers back from Edinburgh and I got a phone call from a passenger I was supposed to be taking to Glasgow at 3 a.m. in a major panic to say that their flight had been cancelled,” the 47-year-old told the Daily Record.

“The poor woman was in floods of tears because they had to get to Heathrow for 8 a.m. that morning,” he added.

RELATED: Overworked and Exhausted Taxi Driver Refuses Customer – She Steps in With a Considerate Solution

Murphy looked for other flights and trains for them and every option available, but there was nothing.

“There was a flight from Manchester to where they were flying to, but they couldn’t get on that,” he said. “So, it was a case of going home for a shower to freshen up after dropping my Edinburgh customers off and hitting the road to London at 1 a.m.”

The customers were awesome though, and very grateful. I didn’t take a penny off them.

John Murphy to the Daily Record

If that wasn’t enough, Murphy ended up driving some people who were stranded in London back to Falkirk with him.

“I checked into my hotel and fell asleep right away, and woke up a wee while later,” Murphy said. “I had a message on my phone from a guy who ended up being stranded at Heathrow with his daughter after being in Germany to see the Rangers game.”

The man saw Murphy’s Facebook post about driving down with a group of passengers. Murphy messaged him back and told him to meet him at his hotel and that he would take him and his daughter back home with him, again not taking any money from the passengers.

RELATED: Student Raises $28,600 For Homeless Man Who Offered To Pay Her Taxi Home

I was in London anyway and having to come back to Falkirk.

John Murphy to the Daily Record

On hearing of the hero driver’s amazing gesture, people were quick to shower him with praise.

“What an absolute trooper. Not many firms would do this,” one person said. And another wrote: “Not all heroes wear capes, some drive taxis. Well done to everyone.”

“I have used this taxi firm for years and they are just amazing. Never any hassle and always go above and beyond,” a third person commented.