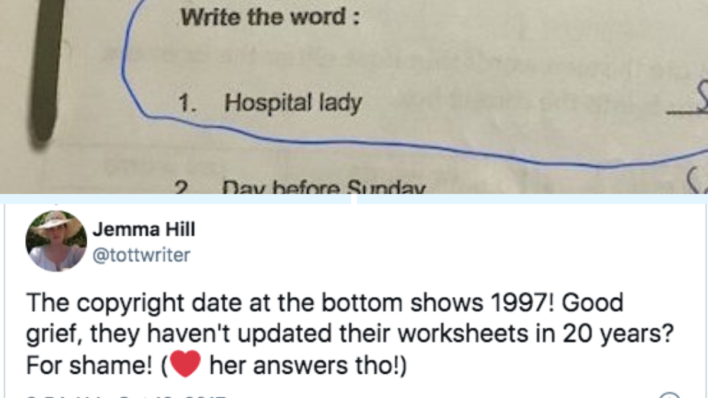 A careless English teacher perpetuated sexist stereotypes with a worksheet for her students — and Twitter wouldn’t let it slight. An
By Joel Balsam    June 30, 2021

A careless English teacher perpetuated sexist stereotypes with a worksheet for her students — and Twitter wouldn’t let it slight.

What started as a simple English spelling worksheet has spiraled into a viral discussion about gender roles and sexism in our society.

It all started with a tweet from a surgeon in the United Kingdom, Robert Sutcliffe, who shared his eight-year-old daughter’s homework, according to GOOD.

The worksheet was intended to highlight words with ‘ur’ in them — simple enough. But if you peer down to the numbered questions there is one word that stands out.

In the question, the student is tasked with finding a word that is like hospital lady, but has the letters ‘ur’ in it. So, the girl smartly writes surgeon. There’s ‘ur’ in it, and as it turns out, both her mom and dad are surgeons. Simple enough.

In the replies to the tweet, people called out the teacher from framing the question as sexist and said how outdated the worksheet was.

Neither actually fits. Surgeons and nurses can be both male and female. The answer is outdated and sexist.

The copyright date at the bottom shows 1997! Good grief, they haven’t updated their worksheets in 20 years? For shame! (❤️ her answers tho!)

I’d be tempted to have a word with the teacher for writing “or nurse” which is obviously answer they were looking for.

It’s clear that the teacher was following the answers of the textbook and didn’t stop to think about the implicit sexism of the assignment. Yes, women can be nurses, but so can surgeons and urologists, which both would be correct answers.

In 1997 this type of oversight makes sense, but not now, or even when this tweet came out in 2017. Children are impressionable from a young age and it’s important to encourage them to do whatever work they choose, regardless of their gender.