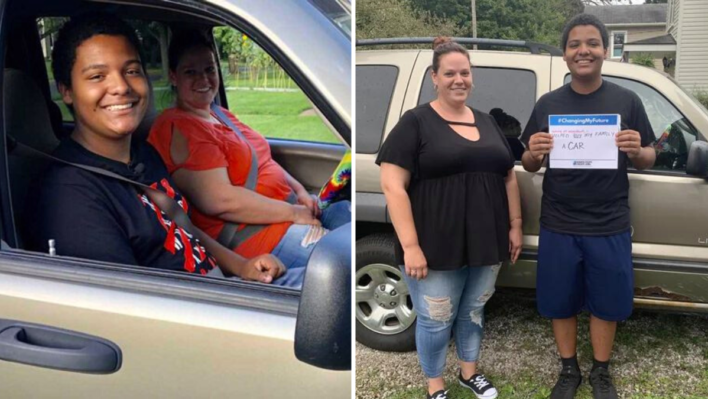 Mom Asks Son to Use Paycheck From Summer Job for “Normal Things” – Instead of Listening to Her, He Spends His Money on This

One Wooster teen had a plan up his sleeve.

Laurie Ramsier knew her 15-year-old son Treston Harris was always a good kid, but one day he did something extra special. He spent most of his summer earnings on a car for his mom.

“My mom was telling me like buy normal things like what kids would do, video games and all that and I was like, ‘I would rather buy a car for the family,'” Treston Harris told News 5 Cleveland.

Why One Mom Couldn’t Afford to Buy a New Car

Her car broke down a year earlier and a new one wasn’t in the budget for the single mom with three kids.

“We spent all last winter pretty much walking to the store or relying on my mom for doctors appointments, grocery store, you know anything we needed to do,” said Ramsier.

Harris spent the summer working at the Salvation Army as a camp counselor for kids.

Harris says he still had fun during summer break and spent about $200 hanging out with friends and buying little things.

How One Teen Proved the Importance of Selflessness

He also said that earning money for the car wasn’t his only reward.

“Last year wasn’t the best year for me. I had some troubles and my grades weren’t the best, but this summer I had time to work through it,” he said.

And his bond with his mom also grew deeper. “It makes me very proud. It makes me feel like I’ve definitely done something right. It takes a real kind heart and a soft soul like him to do what he did,” Ramsier told News 5 Cleveland.

Ramsier clearly has done something right. Instead of spending his money on video games or going out with friends, Harris put his family’s needs and happiness first.