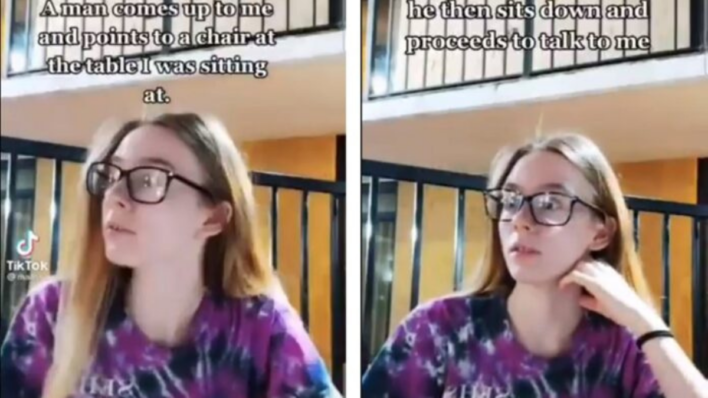 A couple of Tiktok videos showing an older man creeping on an 18-year-old has gone viral, racking up more than
By Joel Balsam    May 19, 2021

A couple of Tiktok videos showing an older man creeping on an 18-year-old has gone viral, racking up more than 14 million views.

He wasn’t welcome at her table

TikToker @maassassin_’s account is mainly to show off her art, but at the end of April she was doing a live video to answer her followers’ questions — and it’s a good thing that she was because the two-part Live caught the entire, cringey, encounter.

In the videos, we can hear a guy ask if he can take the extra chair at the 18-year-old’s table. But instead of walking away, he proceeds to sit down with her.

“Oh, I didn’t mean you can sit there,” says the TikToker, clearly alarmed.

She handles herself well

Yet despite her discomfort, the man — who the TikToker later claims appeared to be in his 30s — tries to drum up conversation by asking her name. She gives him a fake one, “Alyssa.”

“I see your hesitancy,” the man says, adding that he “couldn’t help but notice” she was sitting on her own so he wanted to approach.

“I’m currently on a Live, talking to some people,” says the TikToker, while the on-screen text provides context: “I thought that maybe if I told him people were watching he’d leave.”

Her inkling was right and the man leaned back in his chair and walked away.

At the end of the video, she lets out a nervous laugh because it was the first time this has happened to her.

I never expected this to happen to me in the middle of a hotel courtyard. ##help ##man ##foryou ##staysafe ##scary ##april24 ##creepy ##stranger ##kidnapping

She reported the man

In a follow-up video, the TikToker explains that “it wasn’t right” for a man of that age to approach her, who’s just 18. “I was uncomfortable the entire time,” she adds.

In another video, she says she told the hotel office about the guy, and they knew who he was.

“The lady there does know who he is, so she told me that she’s going to…have a talk with him and…tell him to leave people alone.”

“Of course that won’t do much,” she adds.

The comments on TikTok were disabled, but once shared on Twitter the public weighed in.

“Damn, as a guy in my 30s I feel creeped out just watching this. How do other men justify this? We need to be better,” said one user.

“Raise your hand if this creepy crawly crap happened to you when you were a teenager. He only leaves when she says she’s doing a live feed,” said another. “This stuff happens a bazillion times a day and it sets the tone of what young women and girls begin to expect from men.”

Another said: “That’s not a laugh, sweet girl, that’s fear. You handled yourself brilliantly—esp never having gone thru it b4…clearly irritated but not doing/saying anything to escalate. BUT THE FACT THAT YOU EVEN HAD TO MAKES MY BLOOD RUN COLD. Goddamn this man. Disgusting. I’m so sorry.”

In a couple of other video updates, the TikToker thanked everyone for their concern.

There was some discussion on Twitter about whether what the man did was really wrong — can a man not approach a woman?

The failure in this line of thinking is, first and foremost, the extreme age gap between the approacher and the teen, and it’s not like she looked much older than her age. Second, it’s clear for everyone watching the video that she was uncomfortable — he should have taken that as a hint and left immediately. It shouldn’t have taken her saying she was doing a Live to get him to go away.

As the Twitter user said, “we need to do better.” But fortunately, this type of behavior is seen as unacceptable in the public eye as evidenced by it going viral.