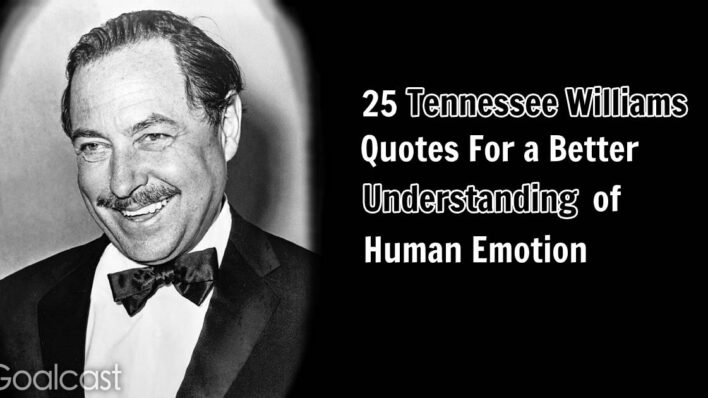 25 Tennessee Williams Quotes For a Better Understanding of Human Emotion

Tennessee Williams (born Thomas Lanier Williams), was an American playwright whose work earned him two Pulitzer Prizes. He is best known for penning iconic plays such as A Streetcar Named Desire and Cat on a Hot Tin Roof.

Williams’ childhood wasn’t a happy one since his parents were resentful of each other most of the time, and his father loved to gamble and drink. His home became a tense place to live in, so young Williams would often escape into the world of reading and writing.

Before having a chance to earn a degree in journalism at the University of Missouri, the writer was forced by his father to take a job as a sales clerk. He later described the time spent there as the most miserable two years of his life that had a major impact on his mental health.

In his plays, Williams used his personal experience as fuel to inspire his creativity, and tackled issues such as human frustration, sexuality and addiction. His work was considered controversial back then, but it established him as one of America’s most important dramatists.

Here are 25 Tennessee Williams quotes on life and human emotion:

If I got rid of my demons, I’d lose my angels.

WHAT IS STRAIGHT? A LINE CAN BE STRAIGHT, OR A STREET, BUT THE HUMAN HEART, OH, NO, IT’S CURVED LIKE A ROAD THROUGH MOUNTAINS.

I think that hate is a feeling that can only exist where there is no understanding.

Time doesn’t take away from friendship, nor does separation.

There’s a time for departure even when there’s no certain place to go.

PHYSICAL BEAUTY IS PASSING – A TRANSITORY POSSESSION – BUT BEAUTY OF THE MIND, RICHNESS OF THE SPIRIT, TENDERNESS OF THE HEART – I HAVE ALL THESE THINGS – AREN’T TAKEN AWAY BUT GROW! INCREASE WITH THE YEARS!

All cruel people describe themselves as paragons of frankness.

Don’t look forward to the day you stop suffering, because when it comes you’ll know you’re dead.

I have always depended on the kindness of strangers.

I didn’t go to the moon, I went much further—for time is the longest distance between two places.

Oh, you can’t describe someone you’re in love with!

Show me a person who hasn’t known any sorrow and I’ll show you a superficial.

Life is an unanswered question, but let’s still believe in the dignity and importance of the question.

A high station in life is earned by the gallantry with which appalling experiences are survived with grace.

Hell is yourself and the only redemption is when a person puts himself aside to feel deeply for another person.

The future is called “perhaps”, which is the only possible thing to call the future. And the only important thing is not to allow that to scare you.

Never inside, I didn’t lie in my heart…

I don’t want realism. I want magic! Yes, yes, magic. I try to give that to people.

The trouble with this world is that everybody has to compromise and conform.

Caged birds accept each other, but flight is what they long for.

The name of a person you love is more than language.

I’ll be all right in a minute, I’m just bewildered – by life…

In memory, everything seems to happen to music.

My only point, the only point that I’m making, is life has got to be allowed to continue even after the dream of life is all over…