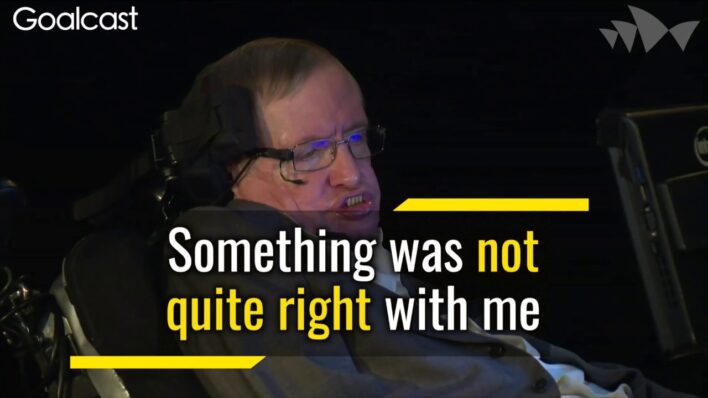 This is Stephen Hawking’s Most Inspiring Message to Humanity

Stephen Hawking – Reach for the Stars Famous cosmologist and all-around inspirational human Stephen Hawking delivers his most greatest speech on
By Goalcast    March 16, 2018

Stephen Hawking – Reach for the Stars

Became clear something was not quite right with me. I fell over and had great difficulty getting up again. My mother realized something was wrong and took me to the doctor. I spent weeks in Bart’s Hospital and had many tests. They never actually told me what was wrong, but I guessed enough to know it was pretty bad. In fact, the doctor who diagnosed me washed his hands of me and I never saw him again. He felt that there was nothing that could be done. At first I became depressed. I seemed to be getting worse pretty rapidly. There didn’t seem any point working on my PhD, because I didn’t know if I would live long enough to finish it.

I had come to Cambridge to do cosmology, and cosmology I was determined to do. Then the condition developed more slowly, and I began to make progress in my work. After my expectations had been reduced to zero, every new day became a bonus, and I began to appreciate everything I did have. And there was also a young woman called Jane, whom I had met at a party. Getting engaged lifted my spirits, and I realized while there’s life, there is hope. There are many ambitious experiments planned for the future. We will map the positions of billions of galaxies, and we will better understand our place in the universe. But we must also continue to go into space for the future of humanity. I don’t think we will survive another thousand years without escaping beyond our fragile planet.

It has been a glorious time to be alive, doing research in theoretical physics. The fact that we humans, who are ourselves mere collections of fundamental particles of nature, have been able to come this close to an understanding of the laws governing us and our universe is a great triumph, and I am happy if I have made a small contribution. I want to share my excitement and enthusiasm about this quest, so remember to look up at the stars and not down at your feet. Try to make sense of what you see, and wonder about what makes the universe exist. Be curious. And however difficult life may seem, there is always something you can do and succeed at. It matters that you don’t just give up. While there’s life, there is hope.