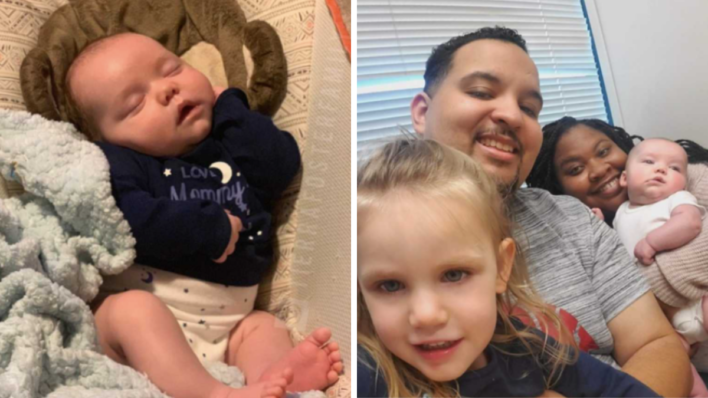 After several years of trying to get pregnant, a couple had the chance to foster a child — and there’s
By Joel Balsam    July 14, 2021

After several years of trying to get pregnant, a couple had the chance to foster a child — and there’s no way they were going to be picky about it.

Couple Tierra and Patrick Hamm started dating at 18 and from early on they knew they wanted a big family. Tierra was one of six children and Patrick was an only child.

But after trying for several years, they weren’t successful. They saw a specialist and tried intrauterine insemination (IUI) to no avail.

Tierra was hesitant about fostering a child, but as soon as she talked to someone who did it she was “100 percent on board.”

In a touching personal essay written for InspireMore, Tierra revealed what that fostering journey was like.

Just a month after becoming licensed foster parents, Tierra and Patrick got a call that would change their life. There was a sweet little 15-month old named Felicity who needed relocation because the previous foster mom was going back to school.

“The social worker on the phone said, ‘She’s very shy and she has attachment issues,” Tierra wrote. “She paused for a second and then said, ‘She’s white. Is that okay?”

“Without hesitating, my husband said, ‘She needs a home, right? Her race is not relevant.”

The very next day, Tierra and Patrick went to pick up baby Felicity, but she cried for 24 hours. Tierra thought about giving up, but soon, though, the baby was calling her parents “Mommy” and “Daddy.”

Felicity was so happy, that the birth mother eventually relinquished custody.

“That was the most bittersweet feeling, to know a mother loved her kids so much, she was willing to sign that part of her life away,” Tierra wrote. “I am forever grateful for her and her sacrifice.”

Nine months later, the Hamms opened themselves up to another foster child and didn’t have to wait long for a phone call from the placement help desk.

“So, you and Patrick are open to taking infants, right?’ I said, ‘Absolutely!’ He responded, ‘How would you like to take in a five-day-old? He is in the hospital right now because he is premature but he will be ready to go home in a couple of days.’ I said, ‘Oh my gosh, yes!”

But the baby, Sam, was in hospital for over a month on a feeding tube due to drug dependency. Still, the family perservered and baby Sam also ended up getting adopted by the Hamms.

Seven weeks later, Sam’s birth mother said she had another baby on the way and wondered if the Hamms would take him. They agreed and both ended up being adopted by the parents.

Now, they have three children all under two.

“Our skin may not match, but you cannot tell me or my kids we aren’t a family,” Tierra wrote. “We live in a predominately white community and we have not faced any hardships or racism, which I am so thankful for. Families do not have to match. As our kids get older, we are discussing race/color more and more. The kids know our skin is different but it doesn’t matter to them. Though we haven’t faced racism, we do get the stares, especially when the kids are yelling ‘mommy and daddy.’”

“Families like ours are rare, but we are out there and we do exist.”

Wow, what a turnaround for the Hamms! For years, they couldn’t have the big family they wanted and then all of a sudden they had three kids. It’s unfortunate that they still get awkward stares from neighbors, but for the most part, this happy, modern family seems to be getting on just fine. You can continue to follow their journey on Tik Tok.