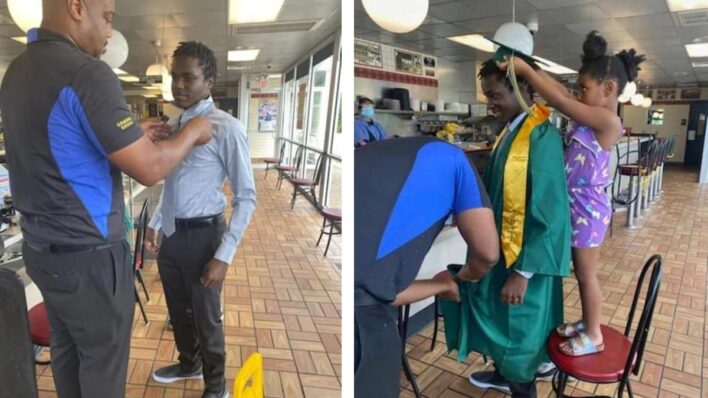 There are certain rites of passage that one looks forward to for years upon years before the moment even occurs.
By Arielle London    June 28, 2021

There are certain rites of passage that one looks forward to for years upon years before the moment even occurs. For example, walking across the stage and finally receiving your high-school diploma.

Timothy Harrison thought that he was going to miss his graduation ceremony, and so he decided to go to work as usual at Waffle House in Center Point, Alabama instead. When his manager Cedric Hampton saw Timothy show up for his 7 AM shift on graduation day, he was shocked.

The manager asked his employee of just only over one month what he was doing there and why he wasn’t attending graduation.

Harrison revealed that his mother could not get off of work to go and also that he did not have tickets or a ride to the ceremony. Additionally, he had been working during the rehearsal where they gave out the cap and gowns, so he did not have those mandatory items for participation.

Support from loved ones

Recognizing both the importance of this moment for Harrison and the fact that the young employee wanted to participate in his milestone moment, Hampton stepped in to help.

“This is once in a lifetime, and he knew it.”

Hampton decided right then and there that he was going to get Timothy to graduation, and so the Waffle House staff launched into action and made it happen.

The Waffle House employees distributed the tasks necessary to get Timothy to grad by 3 PM between them. Hampton told Harrison to get his paperwork and phone the school to let them know that he would be in attendance.

“I said I’d take care of the rest,” the Waffle House manager said. “We were going to make it work, no matter what.”

One staff member drove Timothy to his school, Woodlawn High School, to pick up his cap and gown. Then, the employees pooled approximately $50 and the assistant manager came in on her day off to go to Target and purchase Harrison’s outfit for the day.

“When I put on the clothes, that was a different feeling,” the excited teen said. “I don’t even know the words. A million dollars? It was the best feeling.”

“His smile lit up the room. You could see how important this was to him. It’s something I’ll always remember.”

Timothy made it to graduation and in the end received his high-school diploma with the rest of his graduating class.

While the Center Point Waffle House staff could not attend the graduation because of limited seating, the teammates did wait in the parking lot to congratulate Harrison after the ceremony. And they took photos with Timothy to commemorate the moment and celebrate the day.

Some stories have a happy ending that provides comfort to the soul as they remind us of the possibilities of kindness amongst humankind. Waffle House employees went above and beyond for their colleague and friend when they were under no obligation to do so.

Timothy gained more than he had ever hoped for from the moment, turning one prospectively gloomy day into one that he will remember fondly for the rest of his life.

Pay it forward when and where you can, you could be changing someone’s day for the better, or even their life.