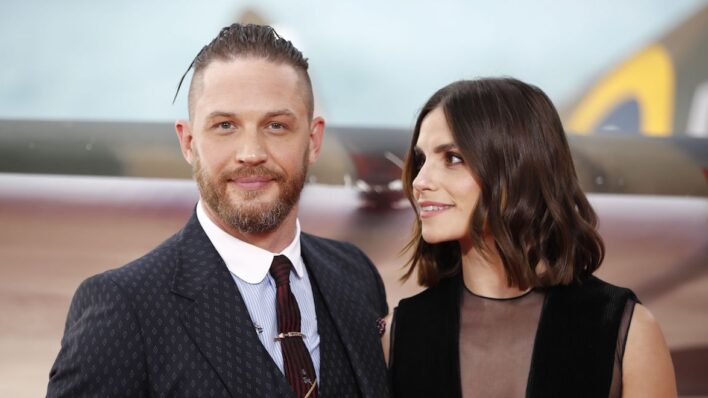 Tom Hardy and Charlotte Riley may have started off on the wrong foot but their romance developed into a strong, resilient bond.
By Barbara Pavone    May 1, 2020

Tom Hardy and Charlotte Riley may have started off on the wrong foot but their romance developed into a strong, resilient bond.

When Tom Hardy first met his now-wife, Charlotte Riley, he didn’t have the best track record in love. The year was 2009 and Hardy already had one divorce under his belt, plus he had just gotten out of a long-term relationship, which gave him his first child — son Louis Thomas Hardy.

The fact was that he and Riley were at very different points in their personal lives, as well as in their professional lives. While the British actor was a household name, Riley was, as The Daily Mail described it, “an unknown straight from drama school.” And yet, they were the perfect match.

Here’s what we can learn from Tom Hardy and Charlotte Riley’s unexpected romance:

Hitting rock bottom doesn’t have to signal the end

Contrary to what some may believe, people can (and do) change. When Tom Hardy first tied the knot with Sarah Ward back in 1999, he was a virtual unknown.

His first credited role wouldn’t come until two years later in a 2001 short called Tommaso. After that, however, his ascent to fame was fast and, as the aspiring star began making a name for himself in Hollywood, his romance took a back seat. By 2004, he was divorced.

Although Hardy hasn’t spoken much about the split, he did reveal that it was his wife who filed for divorce because he simply wasn’t investing enough time and energy into their union. In addition to being busy working, Hardy was spiraling out of control.

Following his breakout role in 2001’s Black Hawk Down, drugs and alcohol, which he began indulging in when he was just 13, took over Hardy’s life. Fueled by his constant anxiety — “Everything scares me,” he once told The Mirror — and newfound fame, Hardy’s substance abuse reached a new level.

I had no idea how to handle the industry, to interact with producers, executive producers, studios, even my fellow men. I was 24 [years old] — punching well above my weight.

His life-changing moment came in 2003 when he woke up in the middle of a London street in a puddle of blood and vomit. Embracing a sober lifestyle took time, however. Although Hardy checked into rehab immediately, he admitted to The Mirror that he was “thinking I’d do it for a little bit until I can go out and drink and people forgive me.”

I did my 28 days, and after listening to people who had been through similar circumstances I realized I did have a problem.

Unfortunately, his young marriage couldn’t survive the strain, but Hardy used that loss as an invaluable opportunity to learn, grow, and better himself. “I had to lose something,” he confessed of his breakthrough moment. “Sometimes you have to lose something that is worth more to you than your drinking.”

Fatherhood made Tom a better man

Since leaving rehab in 2003, Tom Hardy has remained sober and, not long after getting clean, he met assistant director Rachael Speed on the set of The Virgin Queen in 2005.

The pair hit it off and, in 2008, they welcomed their first child together, Louis. However, after four years of romance, they called it quits in 2009. This time around, Hardy was in a different headspace and ready to handle the split the right way: by embracing his newfound dad duties.

When Cosmopolitan asked the Peaky Blinders star why he refused to move to Hollywood, he explained, “My son lives in London with his mother and I need that contact with him. It’s so important to me. Any time away from him is just criminal,” he gushed.

I’m never moving until my boy is old enough to move with me if he wants to.

Once again, Tom Hardy built on his experiences, both good and bad, using them as an opportunity for self-discovery and growth. As he explained in 2014, becoming the best version of himself has “taken being someone’s dad, being divorced, going to rehab, having mortgages, playing different characters, doing theatre, waiting and then it not happening.”

Tom Hardy and Charlotte Riley had timing on their side

When Charlotte Riley first met Tom Hardy on the set of the 2009 ITV adaptation of the Emily Brontë classic Wuthering Heights (he was the Heathcliff to her Cathy), Hardy was a completely different man to the one he had been in his previous long-term relationships. But there was one obstacle in their way: initially, Riley wasn’t a huge fan.

Speaking with The Daily Mail in 2013, she recalled asking Hardy to join her for a cup of her favorite beverage — tea — so they could get to know each other better.

It wasn’t love at first cup. In fact, I was a bit unnerved when he suddenly switched into the persona of Charles Bronson [Britain’s most dangerous prisoner who Tom had just played in Bronson].

Charlotte Riley to The Daily Mail

But then, things changed.

“After a few cups of tea I realized it was something he did mainly to make people laugh,” she explained.

From that moment on, their connection blossomed quickly. They were engaged by the summer of 2010 and, given their incredible talent at keeping secrets, got married in July 2014 without anyone knowing.

It wasn’t until months later that a source confirmed their nuptials, revealing, “It was a beautiful, low-key day made even more special because they just had their closest friends and family around them.”

Hardy’s son, Louis, “played a key role during the ceremony,” which was all about them. “They always said they wanted it to be about the two of them and their family rather than any grand gesture,” the source added.

Almost as impressive as their ability to keep the wedding out of the press was the fact that Louis’ mom (and Hardy’s ex) was one of the couple’s special guests. Talk about conscious uncoupling.

They are extremely protective of their love, and family

From the moment they got together, Tom Hardy and Charlotte Riley aligned on their top priority: family. Riley quickly embraced Louis, calling him “the most incredible, intelligent, creative little human being I have ever met” and gushing, “I feel very honoured to be his stepmom.”

Soon enough, the pair were growing their brood with the arrival of their first child in October 2015 and their second in January 2019. The kids’ names, genders, and photos have never leaked and Riley’s first pregnancy was actually revealed on a red carpet when she showed up with a huge baby bump to Hardy’s Legend premiere.

Addressing the secrecy, Hardy told Esquire, “[Pictures of my] kids are a f***ing no. They really are.” As for Riley, she told The Telegraph, “I don’t feel the need to keep people updated regarding where I am and what I’m doing. I don’t want to put myself out there like that,” she justified. “I enjoy privacy and anonymity.”

They both continue to grow

Since getting together, the couple has continued to grow, helping each other expand their horizons.

As The Daily Mail reported, their influence on one another ranges from music — while she introduced him to ‘40s music, he made her appreciate rap — to overcoming phobias.

Tom actually helped Charlotte overcome a lifelong fear of dogs, which started when she was bitten by a pooch at age two. “He adores dogs and when he was filming Lawless in Atlanta he found this abandoned puppy on a freeway,” she told the outlet.

“He adopted him, got all the necessary vaccinations done, and brought him home […] He’s called Woody and I am totally in love with him.”

In return, she’s instilled one of her biggest passions in him.

I’ve always been a keen letter writer and so Tom and I write to each other most days when we are apart — or at least every other day.

Don’t let your past dictate your future

Our past will always shape who we are, but it’s up to us to decide what kind of effect our life experiences have on our present, and our future. In the case of Tom Hardy, he used everything from addiction to failed relationships and fatherhood to become the best possible version of himself.

And when the right person entered his life at the right time, he was ready. Meanwhile, Riley (whom Hardy describes as a “very kind, pure person”) didn’t question his past or any of his mistakes. Instead she embraced him for him.

As she told The Herald Scotland, “I just love him however he comes.” And that’s the most important love lesson of all.