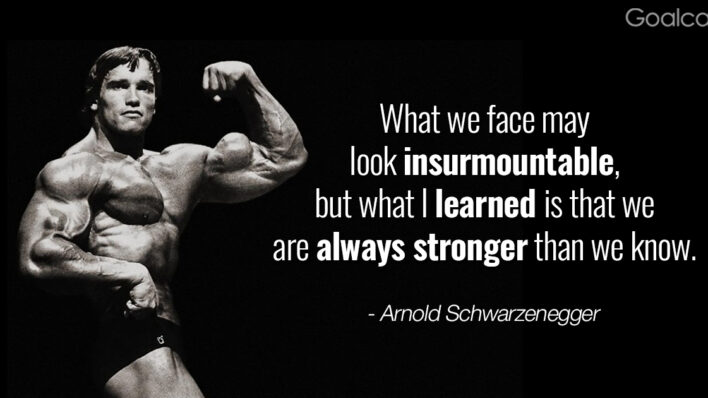 Top 15 Arnold Schwarzenegger Quotes to Pump You Up for Success

Born in a small town in Austria in 1947, Arnold Schwarzenegger has since lived many lives. At age 20, the bodybuilder was already at the top of his game, named the youngest ever recipient of the Mr. Universe title. It was the first of five such titles and seven Mr. Olympia titles that would propel him into an international sports icon.

First life, check. With only “$20 in [his] pocket and some sweaty clothes in a gym bag,” Schwarzeneggger then emigrated to America in 1968 and set his sights on the bright lights of Hollywood. He quickly made a name for himself as he nabbed role after role, winning a Golden Globe for New Star of the Year in 1976 and retiring from bodybuilding competitions in 1980 — after his last Mr. Olympia win — to devote himself fully to acting. It was a fateful decision. In 1984, The Terminator exploded in cinemas to make Hollywood history, launching Schwarzenegger to stardom and stamping him forever with the alter ego of the cyborg assassin from the future.

With dozens of blockbusters under his belt, Schwarzenegger reinvented himself yet again in 2003, when he left the world of entertainment to devote himself fully to public service. Schwarzenegger made a successful leap into the political arena that year, defying sceptics to become the popular “Governator” of California — he always had a gift for playing off his public image — whose bold action on climate change cemented the Golden State’s role as a world leader in the fight to combat global warming. After two terms in office, Schwarzenegger returned to private life in 2010, and continues to devote his time, funds and energy to charitable organizations around the world.

Arnold Schwarzenegger’s many reinventions are a forceful reminder that no matter where we come from, we are ultimately the masters of our own destinies, and that passion, hard work and determination are the only requisites for building the life of your dreams.

Here are our Top 15 Arnold Schwarzenegger Quotes to Pump You Up for Success.

Top 15 Arnold Schwarzenegger Quotes to Pump You Up for Success

Strength does not come from winning. Your struggles develop your strengths. When you go through hardships and decide not to surrender, that is strength.

What is the point of being on this Earth if you are going to be like everyone else?

Just like in bodybuilding, failure is also a necessary experience for growth in our own lives, for if we’re never tested to our limits, how will we know how strong we really are? How will we ever grow?

If you want to turn a vision into reality, you have to give 100% and never stop believing in your dream. For me life is continuously being hungry. The meaning of life is not simply to exist, to survive, but to move ahead, to go up, to achieve, to conquer.

Help others and give something back. I guarantee you will discover that while public service improves the lives and the world around you, its greatest reward is the enrichment and new meaning it will bring your own life. The mind is the limit. As long as the mind can envision the fact that you can do something, you can do it, as long as you really believe 100 percent.

Positive thinking can be contagious. Being surrounded by winners helps you develop into a winner.

Failure is not an option. Everyone has to succeed.

You have to remember something: Everybody pities the weak; jealousy you have to earn. It’s not what you get out of life that counts. Break your mirrors! In our society that is so self-absorbed, begin to look less at yourself and more at each other. you’ll get more satisfaction from having improved your neighborhood, your town, your state, your country, and your fellow human beings than you’ll ever get from your muscles, your figure, your automobile, your house, or your credit rating.

The more knowledge you have, the more you’re free to rely on your instincts.

Be hungry for success, hungry to make your mark, hungry to be seen and to be heard and to have an effect. And as you move up and become successful, make sure also to be hungry for helping others.