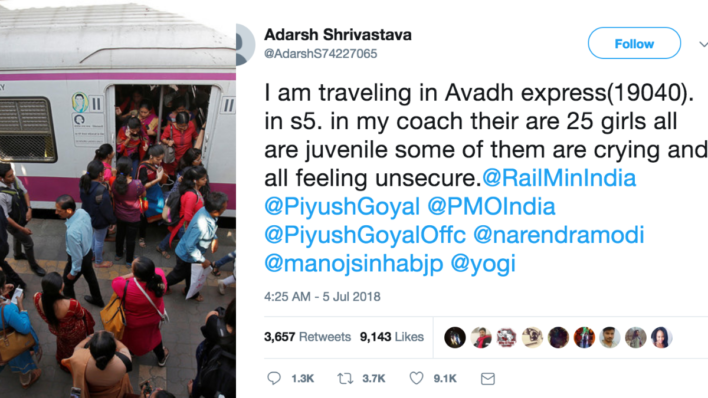 A train passenger in India noticed 26 distressed girls in a traincar and his quick thinking may have saved their
By Joel Balsam    June 30, 2021

A train passenger in India noticed 26 distressed girls in a traincar and his quick thinking may have saved their lives.

Adarsh Shrivastava was traveling on one of India’s famous trains when he saw something strange. In his cabin, there was a large group of young girls — and they all looked visibly distressed.

So Shrivatava did the right thing: he alerted authorities of the suspicious group via Twitter.

I am traveling in Avadh express(19040). in s5. in my coach their are 25 girls all are juvenile some of them are crying and all feeling unsecure.@RailMinIndia @PiyushGoyal @PMOIndia @PiyushGoyalOffc @narendramodi @manojsinhabjp @yogi

The ministry took action thanks to the tip

Less than a month before this, India’s Ministry of Railways launched an awareness campaign about child trafficking because 9,000 Indian children were victims of trafficking in 2016, according to the Ministry of Women and Child Development per Global News. To put trafficking to a halt, the ministry encouraged citizens to alert authorities if they see anything suspicious.

So that’s exactly what Shrivastava did as he tweeted about the girls and the Ministry quickly responded right away.

Kindly look into this matter @rpfner

Railway police in plain clothes arrived on Shrivatava’s train car within a few stops and rounded up the girls. Two men were arrested for the abduction, according to the Press Trust of India.

The girls were all aged between 10 and 14 and struggled to provide details about their names or families. They were transferred to state child welfare where authorities tried to locate the children’s families.

Praised for his heroism

Mr. Adarsh saved the life of 25 girls and all bcoz of his smart move. He tweeted to Rail Ministry, Piyush Goyal , PMO and then action happended very quickly…
Salute to this unsung hero 🙏🙏🙏🙏🙏#ChangeBeginsFromYourOwnDoorSteps

Thank you for being vigilant and doing this. Just read the perpetrators have been arrested. Hats off to you.

But despite the praise, Shrivatava only gave this response:

“Thanks, but as a sitizen [sic] of India it’s our responsibility to help people.”

What it takes to be a hero

As this story shows, it doesn’t take much to be a hero. All you need to do is be aware of what’s going on around and be quick to act.