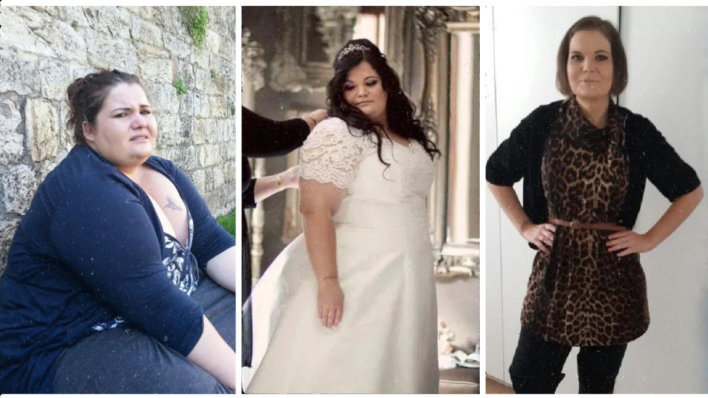 Amy Muller had a major wake-up call after her in-laws purchased 2 airplane tickets for a family vacation.
By Arielle London    June 30, 2021

Amy Muller had a major wake-up call after her in-laws purchased 2 airplane tickets for a family vacation.

Happiness and good health are two dominant features we hope to define in our lives. When you are unhappy or without good health it is often natural to seek out methods to achieve a new status quo.

For one woman, the status quo was no longer working when she realized the extent of her weight gain. At her heaviest she reached 350 lbs.

Amy Muller struggled with her weight her entire life, but as she says, “Being fat ran in my family so as I grew and grew, I simply accepted it.”

Except something would change after she got married to her husband Will. In fact, a well-meaning and equally insensitive gesture from her in-laws would prompt her to make a very big life-altering decision.

Amy hated looking at her wedding pictures, since in her words she “took up most of the shots.”

Amy had struggled with her weight for her entire life

Muller tried many different weight loss approaches but nothing worked. She says, “”It didn’t stop me trying every diet going – Weight Watchers, Atkins, even slimming injections – but nothing worked long term.”

Amy would eventually meet Will after being single for quite some time. She believed that the reason why she wasn’t lucky in love was due to her weight. But Will and Amy fell in love. They were coworkers who first only had dozens of conversations over the phone, but then once they met in person the connection was clear as day.

4 months after the couple began dating they moved in together, and then 6 months later on Amy Muller’s 26th birthday, Will popped the question.

Amy says, “I was over the moon when I accepted Will’s proposal, and vowed to shed a few pounds before the wedding – booked for June 2012.”

However, reality set in, and as opposed to seeing the numbers decline on the scale as Amy had hoped they went in the opposite direction. She explains, “But planning a wedding for just seven months’ time was stressful and typically, I turned to food to cope.”

A year after the wedding Will’s dad wanted to take the family on a vacation. Amy was instantly concerned about logistics. She reveals, “My mind was immediately filled with horrifying visions of me waddling up the plane aisle, and needing mortifying seatbelt extenders.”

Amy recalls, “I told Will I’d sit this one out, but weeks later the plane tickets arrived on the doormat.”

When the tickets arrived, Amy faced a startling gesture and equally harsh truth:

Will’s [My HUsband] dad had bought me two seats. I knew his family meant well and of course I was grateful, but it was mortifying. It was the final straw.

“After my wedding photo shame, I’d already looked into weight loss surgery. But now I was determined to beat the bulge for good.”

“I wanted to be a healthy wife for Will, and we wanted a family together.”

One month after the plane tickets incident, Amy had gastric bypass surgery. The surgery shrunk her stomach to the size of an egg, and the pounds just kept coming off of her afterwards. It took Amy Muller 1 year and 6 months to lose 210 lbs after her surgery.

Amy believes the confidence she gained is unmatched

On her marriage, Amy reveals, “Will had fallen in love with me at 25 stone, but there was no denying my weight loss spiced up our relationship, especially in the bedroom!” The married couple has since started a family together.

Amy Muller says that some of the best parts of her weight loss transformation are “the health benefits” and “my confidence.”

A lifelong battle with good health and happiness on the other side of the mountain you have to climb is always worth making the trek. We all have different needs, but at the end of the day health and self worth are paramount for everyone across the board.

Embarking upon a transformation journey is about more than the pounds that you will shed but more so the person you will become in your mind. Commit to being the person that you want to be and take the steps necessary to get there.

Remember, no matter what obstacles you face, if happiness and good health are on the other side of that mountain—climb it. Transform your life by putting yourself first and watch the results come to fruition.

Your goals manifest into reality when you make a plan to reach them and then put that plan into action. Prioritize what is that is important to you and reach for the life of your dreams. You might as well, since you can live it.