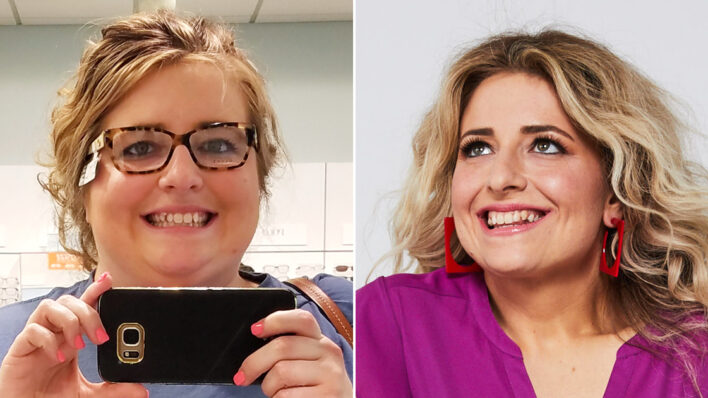 After fainting while helping a patient at work, Katrina Rigden, a physician’s assistant, knew it was time to do something
By MJ Kelly    July 15, 2019

After fainting while helping a patient at work, Katrina Rigden, a physician’s assistant, knew it was time to do something about her weight once and for all.

“I was just checking someone’s pulses in their feet, and I remember that day feeling really sweaty, and just kind of huffing and puffing,” Rigden told People.

“I went to stand back up and I felt like I was hoisting so many bricks on my back, and then I just fell over. That was a big turning point for me. I became the patient.”

The 29 year old knew her weight was a problem but it was never at the top of her priority list. Instead of addressing her health issues, she focused all of her energy on completing her studies.

After Rigden finished two bachelor degrees as an undergraduate, she went on to pursue a master’s degree to become a physician’s assistant.

Growing up, she’d always been “the chubby kid”

“When I first started out I worked so much, because I just wanted to pay off my student loan debt,” said Rigden. “I had 16 hour days, so I didn’t want to meal prep and I didn’t want to even go to the gym just because I was so tired when I got home. All I could do was eat and maybe watch TV and then go to bed.”

“I started by ordering the 6-inch one,” she said. “Then it got to the point where I would order the 12-inch one because it was more economical, and I would say that I would eat the other half later. But I totally didn’t. I literally ate the entire thing.”

At her heaviest, Rigden weighed 345 pounds and was struggling to do her job

“You’ve got to be on your feet and ready to go,” she said. “If someone starts coding or if they stop breathing, you have to be able to briskly get to them, and your cardiovascular health has to be up. And you have to be able to fit into small places. When you’re 345 lbs. and you’re sweating, you’re not able to do it.”

She couldn’t help but feel like she had no credibility as a healthcare provider.

“It’s hard to be in that position and tell people what they should do, and you’re not doing it yourself,” said Rigden. “You’re telling people that they’re having a heart attack because of bad cholesterol and weight issues, while I myself was not healthy.”

Her mom had been encouraging her to start a weight loss program when all of a sudden one day, Rigden lost consciousness at work.

Following the incident, she ran to the bathroom and right away ordered a starter kit from Jenny Craig. “That was basically the moment that changed everything,” she says.

It turned out the program fit her schedule perfectly: meals were sent to her front door, and she could easily bring everything with her to work.

Rigden remembers noticing a difference almost immediately: “The weight started pouring off because I went from eating something like 5000 calories a day to half that.”

In total, she’s been able to lose 178 pounds

Not only did she overhaul her diet, but she also discovered and fell in love with exercise.

“My whole mindset switched from being lazy to wanting to be active all the time,” said Rigden.

Today, she feels like she has better authority as a healthcare provider and her transformation journey has even inspired one of her patients to start dieting.

Rigden has patients coming up to her all the time, remarking about her weight loss, and one was even inspired to start dieting too.

During a recent patient evaluation, Rigden realized she was down on her knees and moving around without a second thought.

“I really came full circle from the beginning where I literally passed out and fell over,” she says.